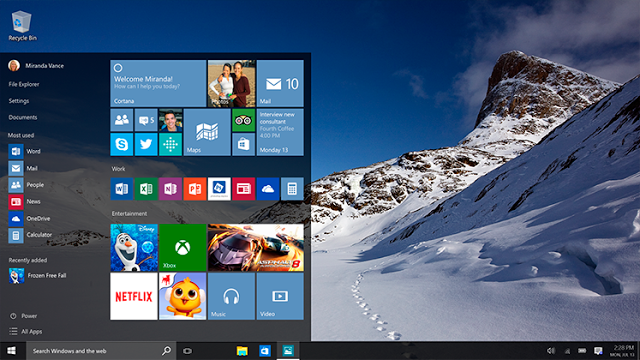 0
Share
Windows
10
launched globally on all Windows platforms on Wednesday. The flagship
Microsoft product revamped with an extensive focus on mobile aims at possible
revival for the company. Windows 10 will be a free upgrade on all personal
devices but businesses will have to pay for their software version. The new
software brings in features like Cartona – a voice assistant rivalling that of
Apple’s Siri and Google Now along with a Xbox app and Microsoft Edge.
Microsoft’s
Windows 10 will be in limelight during the launch party in Kenya. CEO Satya
Nadella Tweeted “Arrived in Kenya to celebrate @Windows 10 launch with
fans & learn how tech is #empowering Kenyan people & orgs”.
“A
new era of Windows starts today. From the beginning, Windows 10 has been unique
— built with feedback from over 5 million fans, delivered as a service and
offered as a free upgrade,” said Terry Myerson, executive vice president at
Microsoft. “Windows 10 delivers on our more personal computing vision,
with a natural, mobile and trusted experience. Along with our partners, we’re
excited to deliver the best Windows ever, which will empower people and
organisations around the world to do great things”.
All
users with genuine Window 7 and Windows 8 software packages are eligible for an
upgrade. The upgrade will not be available to everyone immediately and will be
done in cycles. The company calling Window’s 10 its biggest launch yet will
also be the last of its kind. Going forward the operating system will see
upgrades over regular intervals.

The
company is making big bets on the new Operating system. With the spectacular
failure of Windows 8 and the largely unsuccessful takeover of Nokia Mobiles
it’s vitally important for Microsoft that Window’s 10 succeeds. With the
initial reviews being positive it will be interesting to see if the consumers
finally take to the Microsoft’s product after a really long time.

Cubbon Park to be redrawn to Facilitate Renovation of Govt Buildings.