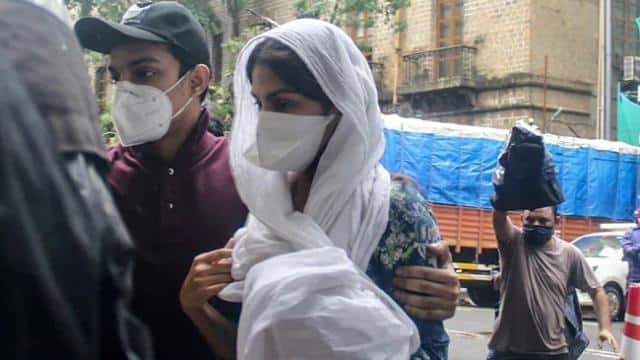 Actress Riya Chakraborty, who is accused of allegedly abetting actor Sushant Singh Rajput to commit suicide, reached the DRDO guest house on Friday morning for a CBI inquiry. Subsequently, CBI’s interrogation of Riya Chakraborty continues till late in the night. For more than nine hours, CBI officials from Riya have been questioning to reveal the truth in Sushant case.

This is the first time the CBI is questioning 28-year-old Riya Chakraborty in the case of the actor’s death. An official said Chakraborty was summoned by the agency to appear before the investigation team at 10:30 am on Friday. He said that Chakraborty left his home at 10 am to go to the DRDO guest house in suburban Santa Cruz. The agency’s investigation team is staying here.

The officer said that before Chakraborty, Siddharth Pithani and manager Samuel Miranda, friends of Rajput and sharing the flat with him, had reached the DRDO guest house for questioning. The CBI team has been in the city for the last eight days to investigate the actor’s death. On Thursday, the agency recorded the statement of Chakravarti’s brother Shouvik Chakraborty. The agency interrogated Shouvik for more than eight hours and recorded his statement.

The CBI has so far questioned his friend Siddharth Pithani, his cook Neeraj Singh, and domestic assistant Dipesh Sawant and others living in the flat with the actor. The Mumbai Police has recorded the statement of the actress before the CBI takes the investigation into the case.

Last week, the Supreme Court cleared the way for the investigation of the case to be handed over to the CBI. Rajput’s father had filed an FIR in Patna accusing Riya and others of abetting the actor to suicide and misappropriating money. On June 14, 34-year-old actor Sushant was found hanging in his flat in suburban Bandra.