Which of these challenges is Diya Mirza, Diana Penty and Aditi Rao Hydari completing a red dot on her palm? Look 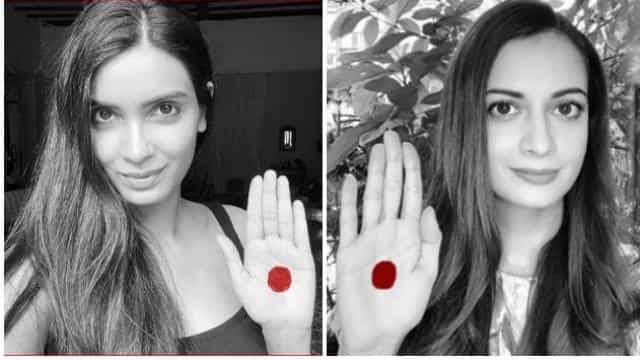 If you are very active on Instagram, then you must also have seen such an image that many influencers and celebrities are posting photos by making a big red dot on their hands. According to the news, this is the latest challenge of Instagram, which is in the discussion for a very good reason. In fact, on 29 May, ‘International Menstrual Hygiene Day’ will be celebrated all over the world. In the same episode, UNICEF has started this red dot challenge, which Bollywood has come out to complete.

This challenge means hatred for periods, shame associated with it and breaking the ban of not talking about it. Many Bollywood actresses and social media influencers are sharing their views about it.

Actress Diya Mirza is also an activist for a long time who speaks openly on issues of environment and women. Sharing his photo, he wrote, “Besides eliminating the shame associated with periods, it is necessary to use such products which are not harmful to the environment. I use biodegradable pads, many people have started using menstrual cups. It is also important that such products are accessible to the people. ”

Actress Kubra Sait wrote that in these two months while sitting at home she came to know the meaning of rest. She says that during periods it is important to drink plenty of water and give the body a rest.

Actress Diana Penty writes, “The time has come to end the shame associated with periods.”

Aditi Rao Hydari, who has appeared in films like ‘Padmavat’, writes, “The time has come to put a fullstop on the shame associated with periods.”

It is indeed a very important thing. Even today, many girls leave school and further studies only because of periods. We hope that in the times to come, more and more girls and men will also openly talk about it and make it part of a normal conversation.