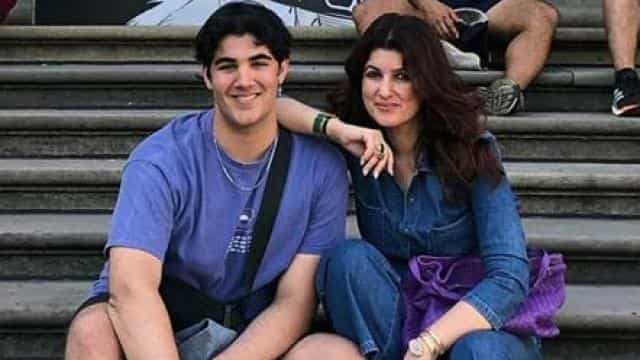 Twinkle Khanna is always in the headlines due to her funny statements. Once Twinkle had told how the reaction of son Aarav happens by watching his kissing scene in the film. Twinkle said in an interview, ‘I don’t like my children watching my movies. My son is very naughty. He plays that clip of my film Jaan in which I have a kissing scene. He made fun of my scene. Not only that, on one of my birthdays, he had made a collage for that scene.

By the way, let Akshay and Twinkle’s son Aarav stay away from Limelight. He always avoids being exposed to the camera.

When Twinkle placed this condition for Akshay in front of Akshay

Do you know that Twinkle had placed a condition for the second child in front of Akshay Kumar. Let me tell you that when both came in Karan Johar’s show Koffee with Karan, Twinkle had disclosed this.

Twinkle had said, “I told Akshay that I will not produce a second child until he does sensitive and good films”. On this talk of Twinkle, Akshay had said, ‘You can understand what will happen to me’. Please tell that Akshay and Twinkle have 2 children Aarav and Nitara.

When PM Modi pulled the ears of Akshay Kumar’s son Aarav, see how his reaction was

Twinkle said on the show that she had done a lot of research on Akshay’s family background. He finds out whether anyone in Akshay’s family has any such disease, which can happen in the coming generations.

Cleansing of Max Healthcare on profiteering in the treatment of Corona, accuses allegations completely wrong

Before Sushant Singh Rajput, these famous Bollywood actors also made the fans embrace the sudden death