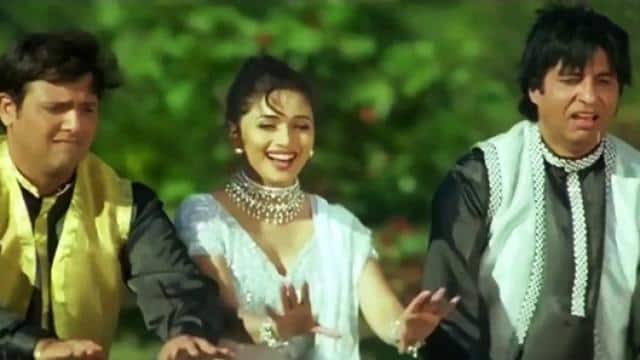 Madhuri Dixit has shared a video of the film Bade Mian Chhote Mian. In the video, Amitabh Bachchan and Govinda protect Madhuri from goons. While sharing the video, Madhuri wrote, “Even today, seeing this scene of Bade Miyan Chhote Mian, I still can’t stop laughing.” It was a lot of fun working with Amitabh Bachchan, Govinda and David Sir.

The film had Amitabh Bachchan and Govinda in the lead role. Both had a double role and Madhuri was part of a short scene in the film. Along with this, Madhuri was seen in the film song Makhna. The chemistry of the three was very much liked by the audience in the song. The film has completed 22 years.

The scenes from #BadeMiyanChoteMiyan still crack me up 😂 It was such a fun experience working with @SrBachchan ji, #Govinda ji, #DavidDhawan sir & the entire team. # 22YearsOfBMCM pic.twitter.com/g315EfRhJq

Let us know that Madhuri is very active on social media and keeps sharing many funny videos. A few days ago Madhuri shared the video with her husband. In the video, Dr. Nene is seen making sabudana khichdi. Madhuri helps them. Seeing Dr. Nene in the video, it is clear that he does not know cooking. Apart from this, he asks Madhuri, what does Quomin say in Hindi? So Madhuri says that it is called cumin.

Sharing the video, Madhuri wrote, ‘Sabudana khichdi,’ Aikonch bhuk lagali na? Come, learn with me and Ram how to make sabudana khichdi my all time favorite. ‘

Talking about Madhuri’s professional life, she was seen in the last film Kalank. Apart from Madhuri, the film had Varun Dhawan, Alia Bhatt, Aditya Roy Kapur and Sonakshi Sinha in the lead roles. Although the film flopped. After this, Madhuri has not announced any of her upcoming projects so far.