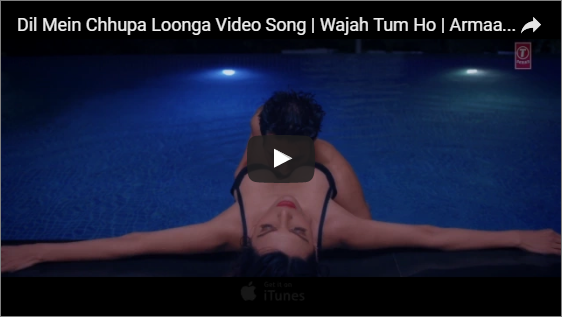 The song features actress Sana Khan, Sherlyn Chopra and Rajneesh Duggal and also the sizzling chemistry between the lead pair. The song is sung by Meet Bros, Armaan Malik & Tulsi Kumar. Music has been given by Meet Bros, lyrics penned by Kumaar. The song is a part of the upcoming Indian crime thriller movie Wajah Tum Ho directed by Vishal Pandya. Vishal Pandya is a Hindi film director, who has directed Hate Story 2 and Hate Story 3 under the production house of T-Series.

The movie is already into controversy due to Arijit Singh. Arijit Singh brutally thrashed music director Abhijit Vaghani for auto-tuning his voice. ‘Pal Pal Dil Ke Pass’ was auto-tuned which was originally sung by the legendary singer Kishore Kumar.

Arjit used Facebook to slam Abhijit Vaghani for destroying his voice and the original song. He wrote the following on his Facebook wall.

I do not understand why people act smart for no reason. Abhijit Vaghani you did not have to tune my voice to this extent.I am so ashamed of this rendition and I so love the original. Good luck with your music bro but honestly your sense of tuning and ruining the classic tune is a classic one.Keep up the good work.You are a talented music producer but I am so done with you.
Thank you for making me hear the worst song master ever,thank you for returning my voice so much that I don’t even recognize.Thank you really for cheating me. If I knew you will change the mix later I wouldn’t have sung this. A classic insult to the original song.

“Dil Mein Chhupa Loonga’ the song is remade from movie’ Darling Darling (1977)’ featuring Dev Anand and Zeenat Aman. In past the song was sung by Kishore Kumar.

Chennai’s Moulivakkam building breakdown: Another tower to be pulverized today