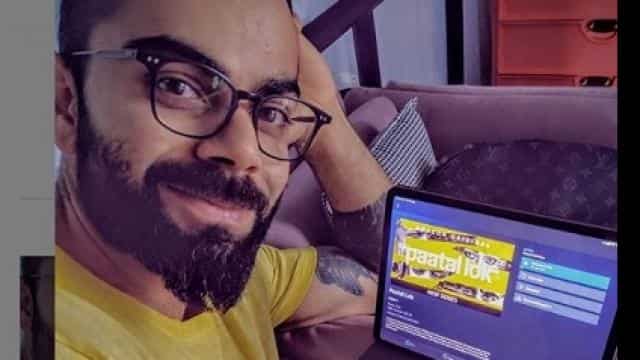 Team India captain Virat Kohli has praised the web series ‘Patal Lok’. ‘Patal Lok’ has recently been released on Amazon Prime. This web series is made under the production of Anushka Sharma. Anuka Sharma and her brother Karnesh’s production house Clean Slate Films has produced this web series. Virat wrote in a tweet that the advantage of marrying the producers of such a web series is that you had seen the show weeks before.

Virat has also shared a photo on Instagram, in which he is sitting on the laptop with this series open. He shared this photo and wrote, ‘I have already seen the entire season of Hades. I knew the show was fantastic in terms of storytelling, screenplay and acting. Now seeing how much people are liking this show, I just want to confirm how I saw this show. I am proud of my love Anushka Sharma, who produced such a great series. He relied on his team which includes our Bhajji Karnesh. Well done brother.

The perks of being married to the producer of this amazing show means I saw it weeks ago 😜 and I absolutely loved it! Well done Team Clean Slate Films 👏👏 @AnushkaSharma 4 @OfficialCSFilms #PataalLok

Virat wrote in his tweet, ‘The advantage of marrying the producer of this great show is that I have already seen this show weeks ago and I also liked it. Congratulations to Team Clean Slate Films. ‘ This web series stars actors like Jaideep Ahlawat, Neeraj Kabi, Abhishek Banerjee, Gul Panag, Swastika Mukherjee. Avinash Arun and Prasit Roy have directed this web series. People are praising this web series a lot.