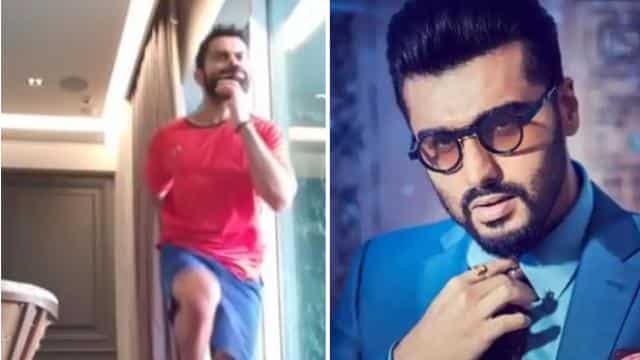 Cricketer Virat Kohli has shared the workout video on social media. In this, he is seen taking a jump at 180 degrees. And the surprising thing in this video is that Virat takes this jump for the first time. While sharing the video, Virat writes that my first shot is 180 degrees landing, top exercises. 4 million people have watched this video of Virat Kohli so far.

Let us tell you that Arjun Kapoor often keeps trolling celebs on social media. He is seen pulling someone’s leg. Fans are also very happy to read their comments. Earlier, Arjun Kapoor and Varun Dhawan shared a meme on Instagram, which was associated with Veteran actor Mithun Chakraborty.

Both are trying to keep their fans entertained in the midst of lockdown. Sometimes by sharing throwback photos, sometimes on live chat, spending time interacting with the fans. Even Arjun Kapoor is posting many videos related to the lockdown. Mith Mithun Chakraborty is seen sitting behind a bicycle and a pistol is seen in his hand. In the mem, it is written that after the lockdown is over, you are as safe as the enemy bullet behind Mithun da bicycle.

Talking about the workfront, Arjun Kapoor is excited to start shooting for a comedy film with Rakul Preet Singh.