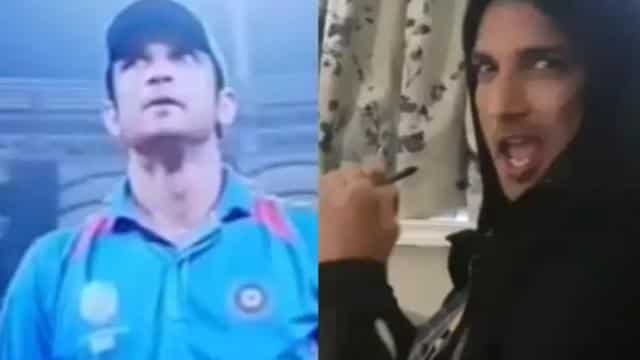 An old video of Bollywood actor Sushant Singh Rajput has surfaced on social media. In this, he is seen watching his own film ‘MS Dhoni – The Untold Story’. There is a book in hand and TV in front of the eyes. The film is playing on TV. The scene in the film is going on when Sushant as Dhoni stands on the cricket pitch. Sushant is seen sitting and chanting slogans. Sushant’s career was a film that doubled his fan base. It was a blockbuster at the box office. Sushant became a fan in the world.

Let me tell you that Sushant himself was a very big Dhoni fan. He always had a dream to play on the cricket pitch with Dhoni and this was also accomplished through the film. Sushant worked hard for the Dhoni film. In his video, he had seen Dhoni playing on the cricket field nearly 100 times for his appearance. Nobody could say in the film that there is any difference between Dhoni and Sushant. Sushant was cast in the role of Dhoni in such a way that he became a compliment.

Before doing films, Sushant Singh Rajput made a mark in the TV world. He started with the serial ‘Pritha Rishta’ and became known as Manav Deshmukh in every household. The show became such a hit that Sushant’s pairing with Ankita Lokhande proved to be the best. Later however, both also came together in real life. Remained in relationship for about 6 years. But both of them had a breakup after venturing into the film world. Let us tell you that on 14 June, Sushant Singh Rajput committed suicide by hanging himself in the house. Mumbai Police is investigating the case.