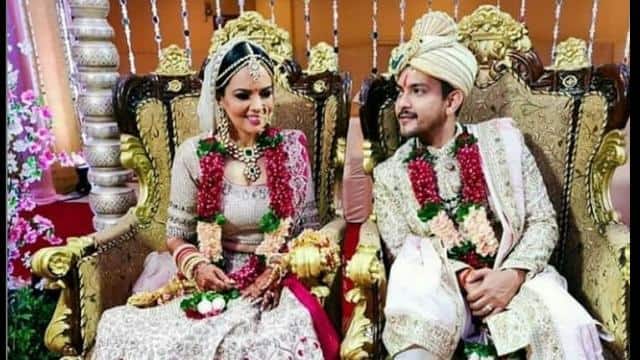 Singer Aditya Narayan is tied up with his girlfriend and actress Shweta Aggarwal in marriage. Pictures of Aditya’s wedding have gone viral on social media. In the pictures, Aditya and Shweta are seen holding each other’s hands and wearing Varmala. As soon as the couple’s wedding photos are revealed, the fans are wishing them a new stage in life.

While Aditya is wearing a cream color sherwani in the pictures, Shweta is also wearing a cream colored lehenga. In the photos, the chemistry and bonding between the new novel couple is worth seeing. After taking seven rounds with Aditya, Shweta has also left for her in-laws. A video of Aditya’s bride Shweta’s farewell has also surfaced on social media. In the video, Aditya and Shweta are seen sitting together in the car.

Pictures of Aditya and Shweta’s baraat also went viral on social media. In the pictures, Aditya’s father and veteran singer Udit Narayan was seen dancing to Bhangra. At the same time, Aditya’s mother also danced with her son on Bhangra.

Apart from this, Aditya who had taken the procession was also brought up by eunuchs. A video of Aditya’s procession is going viral on social media in which Kinnar is demanding money along with blessing Aditya.

Aditya Narayan went out with his girlfriend Shweta for a seven-day wedding procession, see first picture of bride and groom

Which celebs went to Aditya’s wedding

Udit Narayan told that to whom the invitation of the marriage of son Aditya has been sent. Udit said, ‘Both will be married in the temple which will be attended by 50 people and then there will be reception. I have sent invitations to PM Modi, Amitabh Bachchan, Shatrughan Sinha ji, Dharmendra ji, Ranveer Singh, Deepika Padukone and Madhuri Dixit, but do not know if all these will come in view of the escalations of the Kovid case.

When Aditya Narayan came out with eunuchs after taking the procession, see viral videos and photos