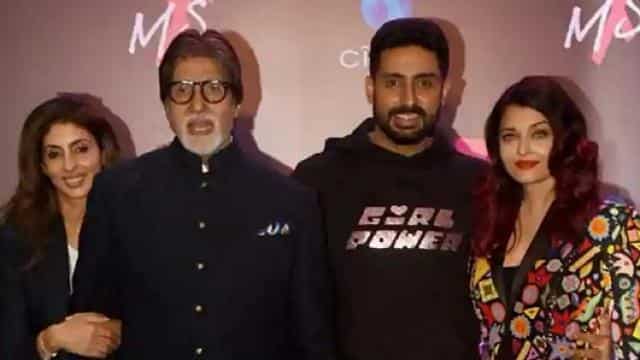 Bollywood superstar Amitabh Bachchan is in the discussion about the new film Gulabo Sitabo. In this, his work is being well liked. Ayushmann Khurrana is also playing an important role in the film. Meanwhile, an old video of Amitabh Bachchan is becoming fiercely viral on social media.

Actually, daughter Shweta Nanda launched her own fashion brand a few years back. Amitabh Bachchan, Abhishek Bachchan and Aishwarya Rai arrived at its launch. It is seen in the video that Amitabh is holding a big carry bag in his hands on the stage. She is also seen with her daughter Shweta. At the same time, Abhishek Bachchan and Aishwarya Rai arrive on stage. Everyone starts clicking photos together. That’s why Amitabh says in a funny manner to Paparaji, give him the impression.

Reverse glasses of Tarak Mehta: ‘Gogi’ used to spend the night sleeping on the ground, worked hard and bought his house

Chahat Khanna shares her backless photo on Instagram, written in caption – Be the queen who doesn’t need a king

This style of Big B is being well liked. Significantly, the film Gulabo Sitabho is getting mixed response. The film is directed by Sujit Sarkar. This is the first film that Ayushman Khurana and Amitabh Bachchan have done together. Apart from Ayushman and Amitabh, stars like Vijay Raj and Brijendra Kala have also acted in it. The story of the film is based on Lucknow.

Kareena Kapoor’s Lips do the most exercise, said – I do pout 100 times a day