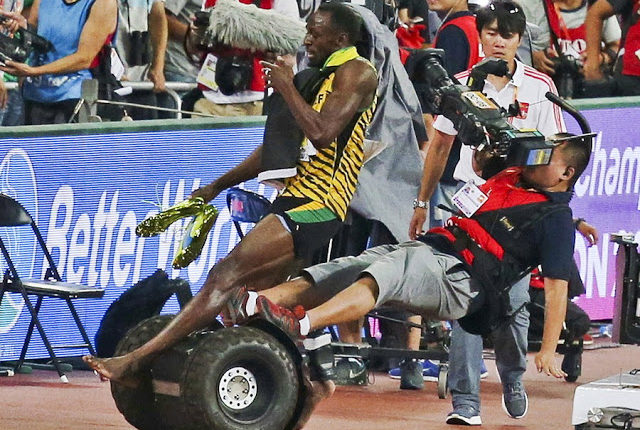 All eyes were on Usain Bolt and Justin Gatlin as they took to the track once again, this time for the 200 meter final at the Bird Nest stadium and Bolt again did not shy away from leaving his opponents in dust by winning his world record tenth title at the World Championship. He took just 19.55 seconds from the starting block to tearing the finish tape celebrating another milestone attained. Justin Gatlin ended the race in 19.74 seconds unable to minimize the gap losing out to sheer class of the champion.

Bolt returned to the track after an injury saga. He recorded the quickest time of the year showing signs of a very healthy recovery. Bolt will also be competing in the 4×100 meter relay.

Not to be outdone on being memorable just for his sprint, his victory lap had a funny moment when the Camera man on board a Segway lost control after the left wheel rubbed against the metal rail, swaying the Segway heavily to the right lifting Bolt’s off his feet. Bolt collapsed on the camera man as the Segway headed on its own merry journey. Bolt would swoop back to his feet encountering a humbled and embarrassed face with the outstretched hand of the camera man seeking an apology.

“I am fine. I have a few cuts. But it’s nothing I have never done to myself in training. I feel like Justin Gatlin had something to do with it. Maybe,” he said with a laugh.

The win at the world championship shows that there is a character to the athlete that drives him to victory beyond his physique. There were questions raised after his return on whether he will be able to sustain his endurance on the track especially with the media spurred Bolt vs Gatlin charade. Bolt is overcome his own doubts and at 29 has proven that he will be a dominating force for years to come.