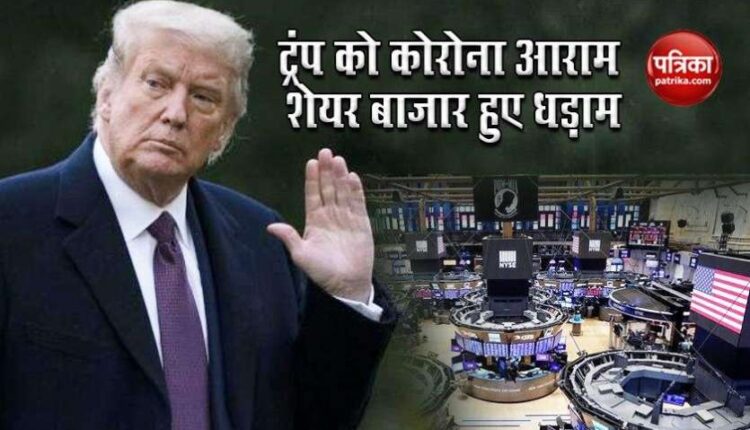 new Delhi. After the news of US President Donald Trump and his wife Melania Trump Trump Corona virus positive, the US future market is now witnessing a big decline in the stock market. As of US time, there is a sharp decline in the open markets at 9:30 am in the markets like Naxdac Composite, Dow Jones, S&P 500, New York Stock Exchange. On the other hand, the condition of European markets is also getting worse. Euro stocks 500, FTSE 100, DAX and CAC are also trading with a big decline. Let me tell you, in the US presidential election, hopes of Donald Trump becoming President once again are being raised. In this case, their being corona positive is neither a good sign for them nor for the market.

European markets also fall
On the other hand, European stock markets are also seeing a decline. Euro stocks are trading down 0.51 percent in almost half an hour. The Financial Times Stock Exchange is trading with 0.25 per cent. DAX is trading down by 0.70 per cent. The CAC is witnessing a decline of 0.46 per cent. According to experts, it may see a further decline in business volume.

Read also: The biggest relief to the government in the month of September, GST collection of Rs 95,480 crore

Fall in oil price
At the same time, falling crude oil prices of futures markets are also seen. US Oil WTI Future is trading down 4.55 percent. On the other hand, Brent is trading at 4.43 per cent in the future. Let us tell you that the price of crude oil is already falling. In the last 45 days, crude oil has broken more than 10%.

Good news for railway passengers! Railway will run more than 200 special trains in the festival, special care will be taken of Kovid-19

Javed Akhtar told- If Farhan and Zoya took drugs, what would they do