Urvashi Rautela touched her feet as soon as she met Milkha Singh, the fans said – what are the rites 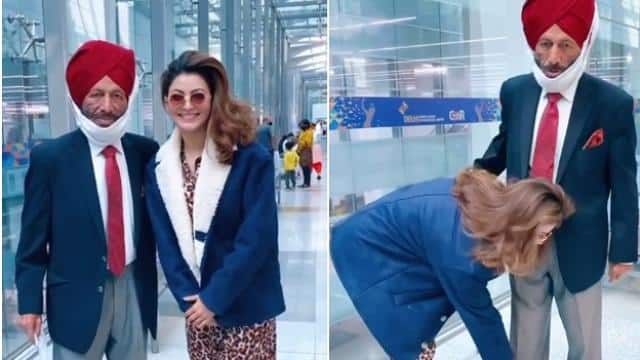 Urvashi then clicks photos with Milkha Singh. During this time Urvashi wore an animal print jumpsuit and a blue jacket over it.

Let us know that recently Urvashi became the first Indian woman to become a showstopper at Arab Fashion Week.

Hrithik Roshan was sad to be added to the name

A few days ago Urvashi said on joining name with Hrithik, ‘I had many false accusations that I used to talk to Hrithik Roshan on the phone from 2 am to 4 am. These false accusations harm celebrities, be it a star kid or an outsider. The important thing that I notice is that these kinds of stories are never for Star Kids. I am a fan of Hrithik and his work, but that does not mean that I have a love angle for him. These things affect people with mental health and may have happened here with Sushant as well.

Aditya Narayan said – Father was angry after flirting with Alka Yagnik, know why

Salman Khan isolates for 14 days due to this, will be able to shoot ‘Bigg Boss 14’?