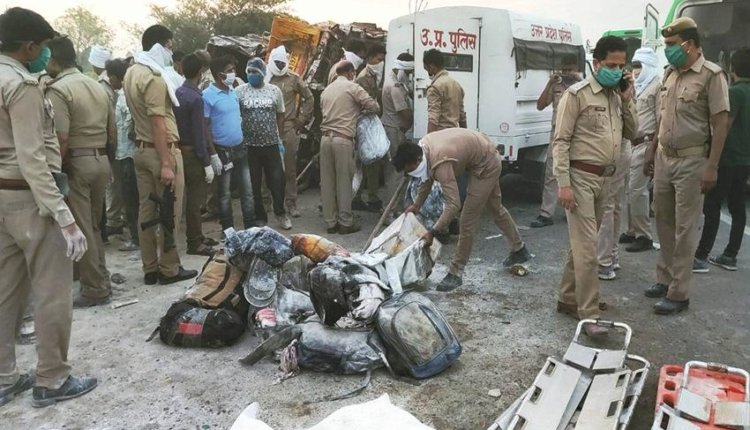 Expressing grief over the road accident in Auraiya, the Yogi government of UP has announced a compensation of two lakh rupees to the families of all the dead. With this, the government has immediately suspended two SHOs. Those suspended include SHO of Kosi Kalan Mathura and Fatehpur Sikri Agra. The government has sought reports from SSP, IG and ADG. PM Modi has also expressed grief over this incident.

In fact, a truck carrying migrant laborers trapped in Corona virus crisis and lockdown crashed in Auraiya, UP on Saturday morning. 24 workers have died in this accident, while 22 people have been injured. The condition of 15 of the injured remains critical. This accident happened on the morning. Officials said that all these workers were going from Rajasthan to Bihar, Bengal and Jharkhand in two trucks. Meanwhile, a truck stopped at the dhaba on the Delhi-Kanpur highway in Auraiya, when the truck coming from behind hit it.

Auraiya District Magistrate Abhishek Singh said that the accident occurred at around 3.30 am. All the injured have been admitted to the district hospital in Auraiya. Chief Medical Officer of Auraiya, Archana Srivastava said that seriously injured patients have been referred to the PGI of Saifai.

Large numbers of migrant laborers continue to flee due to the Corona virus lockdown. These workers are leaving their homes on foot. During this period, migrants are also falling victim to accidents. In the past, laborers sleeping on the railway tracks in Aurangabad, Maharashtra were crushed by a goods train, in which 16 laborers were killed. At the same time, 6 workers were killed in a road accident in MP. Now 24 laborers have lost their lives in the accident in Aureya.