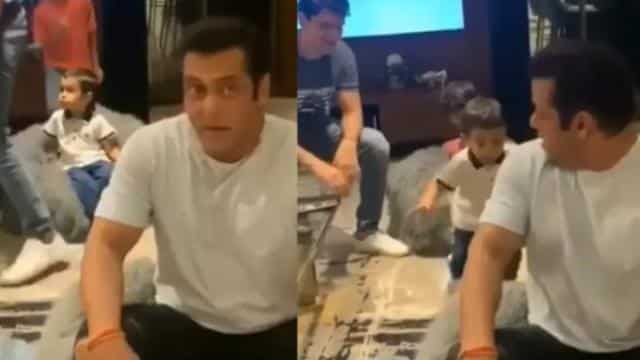 Bollywood actor Salman Khan is a children’s favorite star. Salman Khan’s bonding with sister Arpita’s son Ahil looks tremendous. Salman Khan likes to spend time with Ahil. The bean bag video of Salman Khan and Ahil is becoming quite viral on social media. In this video before the lockdown, you can see Ahil falling over ‘Mamu’ Salman. Ahil is also seen in a very good mood in it.

Earlier, a video of Ahil with Jacqueline Fernandes went viral, in which both Oreos were seen eating biscuits. Both are in the living area, Jacqueline makes a cat sound when Ahil is enjoying her biscuits. Ahil is happy and starts enjoying the biscuits.

Tiger Shroff flaunted the abs and shared shirtless photos, Ranveer Singh enjoyed it, even the fans were not behind

The Khan family is under self-isolation due to the lockdown. Everybody is spending time at the Panvel farmhouse. Talking about Salman Khan’s workfront, he was busy shooting for the film ‘Radhey’. But the film’s shooting was stopped due to the lockdown. Apart from this, he is planning to work on the film ‘Kabhi Eid Kabhi Diwali’. However, the film’s shooting has not started yet. Yes, the star cast is definitely in discussion.