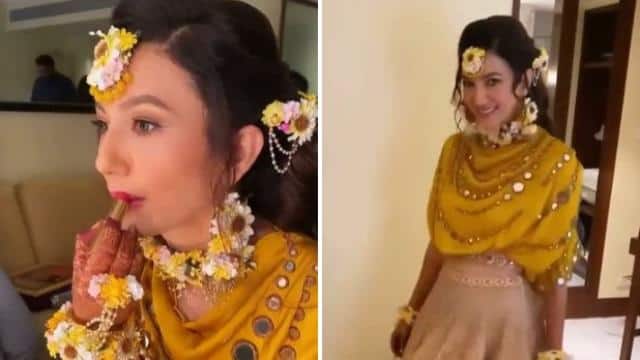 Reality show ‘Bigg Boss 7’ winner Gauhar Khan has married boyfriend Zaid Darbar. After Nikah, she is giving fans a treat by sharing photos and videos one after the other on Instagram. She is continuously sharing some videos inside the celebrations. On Instagram, Gauhar Khan has shared a video related to how she got dressed in Haldi Ceremony.

Gauhar Khan wrote in the caption of the video, “Awesome day”. Let us know that the reception party of both was held on the day of Nikah. The two danced to the song ‘Tum Mil Ke Aisa Laga’. Close friends and family members attended the function. Both the wedding and reception were organized at Mumbai’s ITC Grand Maratha Hotel. Both the stars have been sharing pictures of their wedding show continuously for the past several days.

Not only this, both had also done a pre-wedding photoshoot and shared photos with the fans. Earlier on Thursday night, both stars celebrated their mehndi ceremonies. During this time, Zaid Darbar’s father and veteran musician Ismail Darbar was seen singing the song ‘Lut Gaye Hum Teri Mohabbat Mein’ from ‘Hum Dil De Chuke Sanam’.

Gauhar also included his fans and media in his happiness. She was constantly sharing photos on Instagram, sharing updates of pre-wedding ceremonies. During the lockdown, the two had decided to be forever together. Interestingly, there is a big age difference between Zaid Darbar and Gauhar Khan.