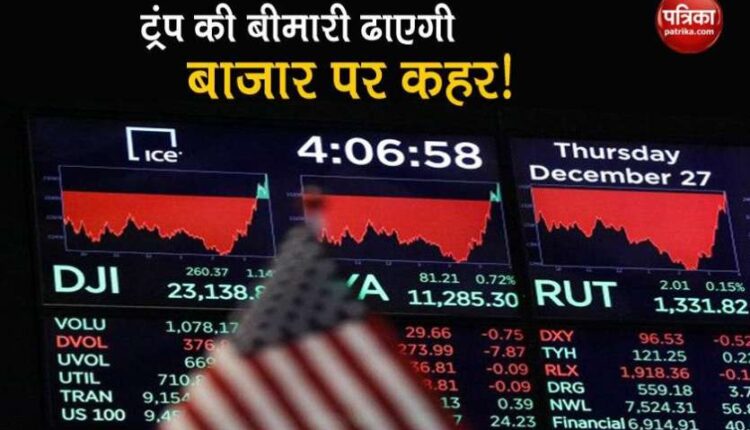 new Delhi. Many things are coming out about the health of the US President, according to media reports, although the Trump couple is fine, but the next 48 hours is very important. The special thing is that the next 48 hours are very important for the world as well. When the stock markets around the world open, from Bombay to Hong Kong and from Shanghai to New Delhi, all will be shaken. This means that major indices of the stock markets of Asia, including India, and then the US and Europe can be seen to fall. Last Friday, when Trump was reported to be Corona positive, the global futures markets closed in the morning with a major fall in the stock markets. By the way, on 2 October, markets were closed due to Gandhi Jayanti holiday in India. In such a situation, its effect can be seen on Monday.

Also read: All reforms from GST collection to exports, economy will come out!

Stock market may fall in India
According to experts, the stock market has seen a long weekend since Thursday. Due to which the impact of the fall in the global market was not seen in the Indian stock market, but when the markets open on Monday, the sentiment is likely to remain negative. According to experts, the market may see a fall of one and a half to two per cent. Which is a boom of the last five trading sessions. According to expert opinion, there will be pressure on the market to be a corona. Also, there are chances of increasing pressure of corona virus cases in the country. By the way, the figures for September are very good. In such a situation, the market may not see as much decline as is expected.

American markets will wreak havoc
Prior to the presidential election, the news of Donald Trump, the President of the US and the candidate of the Republic Party, becoming corona is a very serious and big incident. The effect of which can be seen on Monday like Friday. On Friday, the New York Stock Exchange closed on the flat level after coming on the green mark, but the pressure of Trump’s disease will remain. The Nasdaq saw a decline of over 2.22 percent. While the S&P closed with a one per cent fall. The Dow Jones closed with a decline of 134 points. In such a situation, a fall in these indexes is possible again.

European markets may be suffering
Euro stocks and DAX, the two leading indices of European markets, both closed down by 0.10 per cent and 0.33 per cent, respectively. There was recovery in FTSE. The Financial Times Exchange closed up 0.39 percent. CSC too closed flat on the green mark with a gain of 0.02 per cent. Experts say that in the coming days, due to Trump’s disease prediction, European markets may see a fall of one and a half percent.

How can the Asian markets stand
On the other hand, the trend of Asian markets is also very important. Markets like Nikkai, Tokyo, Hengseng and Shanghai may also see a downward trend. China’s economic data has been good. In such a situation, the pressure may be slightly lighter. However, Nikkai closed down 0.67 percent on Friday. At the same time, Tokyo market saw a decline of one percent. Hengseng and Shanghai Stock Exchange have not opened since 30. In such a situation, pressure can also be seen in both these markets.

CNG became cheaper by about 7 rupees in a year in Delhi, PN fell by more than 3 rupees