The country shook with this picture, but DM Sahab said – No big deal, we used to do this as a child too. 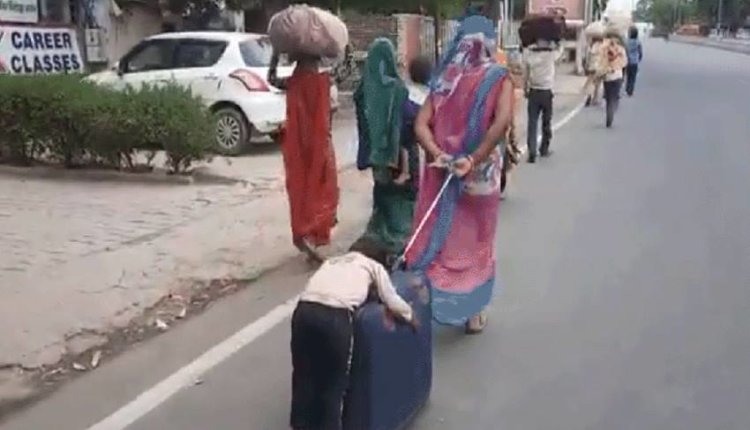 The migration of migrant laborers to their homes continues in the midst of the lockdown implemented due to Corona virus. Along with migrant laborers, their young children are also having to walk long distances on foot. A video has surfaced on social media where a child gets tired while walking, his mother put him to sleep on the trolley and his mother continues to pull the trolley forward. From this picture, where the whole country has been shaken. People are discussing it right there, the DM of Agra finds this simple thing.

Video of the sleeping kid on trolly bag pic.twitter.com/t77AXiZG3u

This video is from Agra. In fact, about one and a half dozen people of Mahoba in Jhansi district left Punjab on their way home three days ago. According to the woman’s husband, those people have been walking for three days. If you get some food on the way, then some eat it or else walk on foot. They say they just have to reach home.

Madhya Pradesh: A man wheeled his daughter & pregnant wife for the most part of the journey from Hyderabad to Balaghat district on a makeshift wooden cart. His wife says, “We reached Hyderabad on March 17. When we ran out of money & food, my husband made the cart & we left the city”. pic.twitter.com/mrlDsxZenn

Some such picture of helplessness is from the family of Madhya Pradesh. A migrant laborer walked 17 days in a sweltering afternoon. When no option was found to come home from Hyderabad, after making a wooden car, the pregnant wife and two-year-old daughter got on this car and walked towards the house. When the soldiers saw this couple coming on the Rajegaon border, they helped them. The daughter did not even have slippers in her feet, after which the police provided the girl with slippers and then arranged to take the family home.

Ishaan Khattar on romance with Tabu in A Suitable Boy, said – It was not tough at all