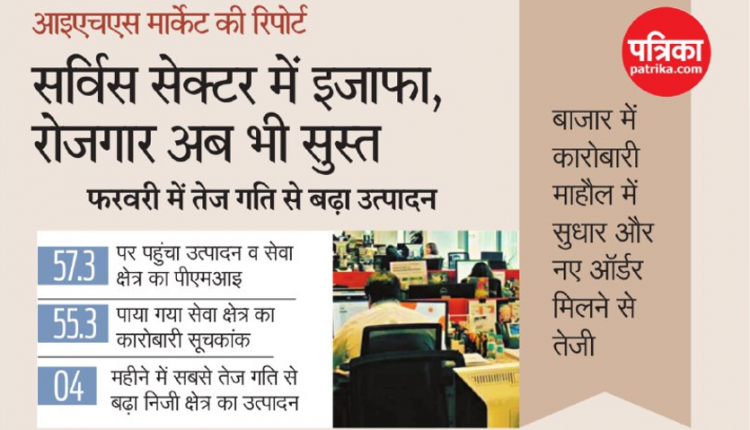 New Delhi. The services sector, which plays the biggest role in the economy, has witnessed the biggest boom in a year. The services sector business index was found to be 55.3 in February from 52.8 in January. This is the fifth consecutive month when the services sector has expanded in activities. In the monthly report of IHS Market, the service sector has gained momentum due to improvement in business environment and new orders in the market. Polina D. Lima, Assistant Director (Economics), IHS Markets, said the challenges still remain with increasing costs and expenses for companies.

Private sector production at the top –
Lima has stated that private sector production has grown at the fastest pace in 4 months. Composite PMI of production and service sector reached 57.3 in February, as against 55.8 in January. Further improvement is expected in the March quarter after the economy comes out of recession in the third quarter. Despite the growth in new business, there was a decrease in employment, but the last month of the current financial year and the new fiscal year are expected to pick up.

Inflation is the fastest in seven years-
Due to the increase in fuel prices, the cost of freight has increased in February. It has also impacted production and corporate costs have risen the fastest since 2013. Many companies believe that Kovid’s restrictions have had an impact on labor supply. Lima said employment was slow in both the service and manufacturing sectors. This may impact domestic consumption in the coming months. However, the capacities of both the regions are expanding. Good days are coming on the employment front.