Team “Tamasha” goes on a train ride from Mumbai to Delhi 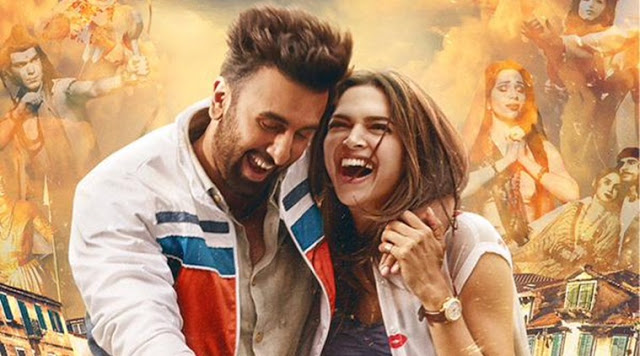 Deepika Padukone’s wish of going on a train journey with Ranbir Kapoor comes true as the actor takes her from Mumbai to Delhi.

Director Imtiyaz Ali’s “Tamasha”, starring the duo is yet another name behind their train journey as Imtiyaz Ali was also seen joining them in the train journey. Tamasha is all set to get released on 27th this November.

Starting from boarding the train, the team has enjoyed the journey to the fullest. Listening to music, singing aloud, dancing, eating food from the pantry service, getting off at the stops and so on were the things they did to experience the joy of travelling by train.

A timely update of the journey goes like this:
3:20 pm: Deepika and Ranbir reached the Mumbai central station from where they boarded an express train to Delhi. The station of course had a huge crowd of fans waiting to see the “Tamasha” team. They waited at the station Master’s office until the announcement of their train’s arrival was made.

4 pm: The team boarded the train as it arrived at the platform.

4:15 pm: Ranbir was seen clicking pictures of the team. He carried the camera to capture the upcoming memories of their journey in the train.

4:30: Imtiaz, ranbir and Deepika had their shares of tender coconut.

5:00: As a part of the journey, the ticket checker arrived. After getting their tickets checked and approved by him, they posed with the TC for a few clicks.

5:30: Imtiaz and Deepika sipped on the special coffee from the train pantry service.

6:00 pm: Ranbir chose to sit on at window seat. Deepika was seen sitting beside him. Looking through the window, the trio was amazed with the scenery of the setting sun.

7:00 pm: Deepika had in fact carried some of the foodie goodies in her picnic basket as she was in charge of it.

8:27 pm: The train reached Vadodara, the first stop of the journey, and halted for 10 minutes. The platform witnessed a huge crowd including media people who were eager to get a glimpse of the most awaited duo. Ranbir and Deepika indeed obliged the crowd, also posed for snaps and interacted with the Vadodara media team.

9:00 pm: The trio went to the pantry and placed an order for their dinner. They also interacted with the chefs after enjoying the delicious food that they had prepared.

11:00 pm: Deepika added a surprise element to the journey by carrying a karaoke kit. The team had great fun singing and dancing for the tunes of Bollywood’s famous songs of all times.

3:00 am: The train arrived at the second stop at Kota junction. There was yet another huge fanfare waiting at the platform. The trio got out of the train, sipped on some tea at a stall and posed for pictures after greeting the enthusiastic crowd.

4:00 pm: They all occupied their berths for a few hours of sleep.

7:55 am: the train reached Delhi on time. The team saw a warm welcome at the station.
Both Ranbir and Deepika were excited about their journey and are indeed very happy to have had a great one. They also said to have carried a lot of good memories back home.
Actress Deepika made a statement that; Ranbir would not tie the knots with his date, Katrina kaif, unless Deepika allowed him to.

Ranbir, who is 33 years old, had dated Deepika for a year. The duo still shares a good relationship which is conflict less.

Ranbir and Deepika had made their career debuts in Bollywood in the year 2007 with Saawariya and Om Shanti Om respectively.

Deepika told PTI, “Ranbir can’t get married till I allow it,”

Ranbir said “It’s a very big question about my life. I completely believe in the institution of marriage. When I’ll get married, I will let the whole world know about it,”

“It feels just like yesterday. I saw Deepika outside the sets of Saawariya, walking across to the Om Shanti Om set. Eight years have passed and we have no idea. We have worked hard and have reached the point which we had desired for,” added Ranbir.