Tax evasion will not be easy, from medical to property tax will have to be shown in Form 26AS 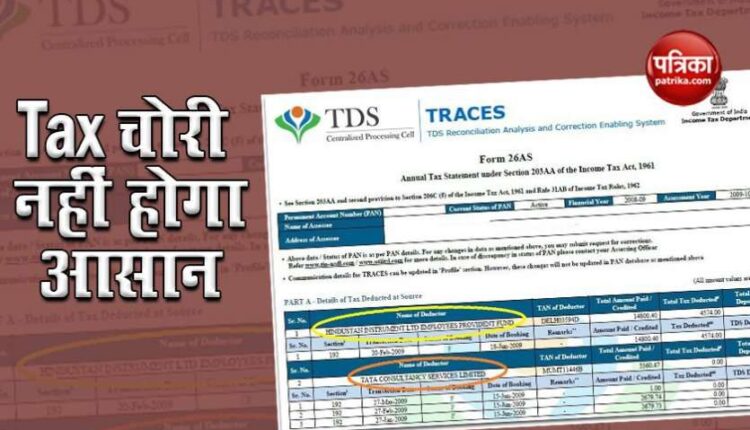 new Delhi : If you are also among those who try to save their tax by putting wrong bills or hiding, then tell you that it will not be so easy to do tax evasion now. In fact, the government has issued Form 26AS and the scope of the new form (Changes in Form 26AS) has now been extended more than ever.

In simple words, neither forms you have to include bills like property tax, medical bills, hotel bills and insurance premiums. This will give the government accurate information about the income of the people. Along with this, it is reported that the government will reduce their spending limit.

Tax Return will be easyYou know that Prime Minister Narendra Modi launched a new tax platform on Thursday. Along with this, many more tax reforms such as faceless assessment and simplification of return filing were also announced to increase the scope of tax. The government has also decided to reduce the limit of all types of transactions for tax disclosure.

Under the new arrangement, you will pay insurance premium or hotel bill of more than 20 thousand rupees. If you will pay school fees of more than Rs 50,000 and more than one lakh rupees on life insurance, or if you purchase any white goods, jewelery, marble or painting, then the government has given the information to whom you have paid for these things. Have to give.

Currently, buying assets worth more than 30 lakh rupees, investments of 10 lakh rupees in shares, mutual funds, demat, credit cards and transactions made through fixed deposits of more than 10 lakh rupees. It has to be reported.

Under the new system, the limit of cash deposits in banks has been increased from 10 lakhs to 25 lakhs for savings account and 50 lakhs for current account but if you make banking transactions of more than 30 lakh rupees then you have to file tax return. Will happen.

Invest once in NSC scheme of Post Office, you will get 1 crore in returns, know how?