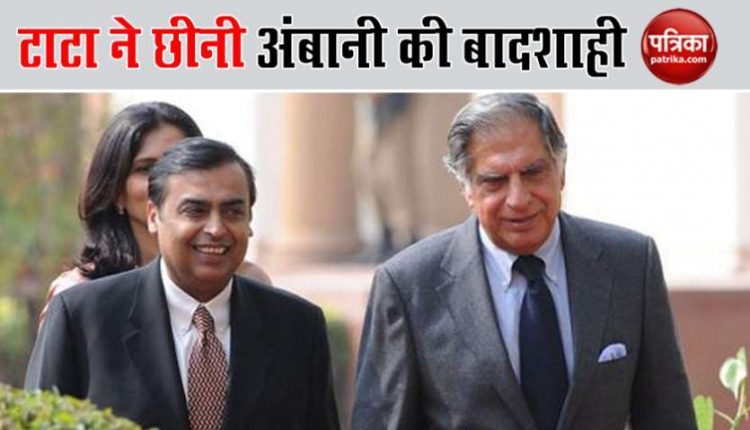 New Delhi- Tata and Ambani are the two industrial houses of the country that have a rivalry between the kingdoms. Mukesh Ambani’s company RIL’s market cap sometimes exceeds the Tata Group and sometimes lags behind the Tata Group. Talking about the last year, in July 2020, Reliance Group had become the top business house, pushing the Tata Group back. But within a span of 6 months, the Tata group again took the reigns.

Tata Group, the leader of TCS, whose company has led the rise in Tata’s market cap, once again, due to its credibility and trust among the people for the product, whose company TCS’s great performance, once again made the country’s largest Business has become a gharana. And Mukesh Ambani’s Reliance Group, which was ranked first in terms of market value, has slipped to number three in the current round. HDFC Group has captured the second spot after Tata. If we talk about the market cap of all the companies, then the market cap of all the companies of Tata group has reached Rs 17 lakh crore, HDFC Group of the second position has reached about Rs 2 lakh crore. HDFC Group’s market cap has reached Rs 15.25 lakh crore.

Tata Group’s market cap increased by 42% in a year

Reliance had jumped number-1 in July 2020

Looking at the half yearly report of July 2020, the total market cap of 17 listed companies of Tata Group was 11.32 lakh crores. On the other hand, the market cap of Reliance Industries had crossed 13 lakh crores, at that time Reliance Group became the number-1 group in the country beating the Tata group.

Tata Group’s leading companies TCS, Tata Motors and Tata Steel showed amazing performance during this period, taking the Tata Group’s market cap to over Rs 16.69 lakh crore, 36% more than Reliance Group. This surge was seen on the strength of TCS’s strong stocks and the company made several big deals during the Corona epidemic, on the other hand, the steel price jumped which gave a tremendous advantage to the Tata group. Tata Motors shares also jumped more than 100% after July. On the other hand, Reliance got a big jump by Jio. Global companies like Facebook, Google invested in Reliance, but if Reliance got the benefit, the Aramco deal dispute spoiled the mood of investors, which resulted in the Reliance Group shares after September. Climbed to 22%.