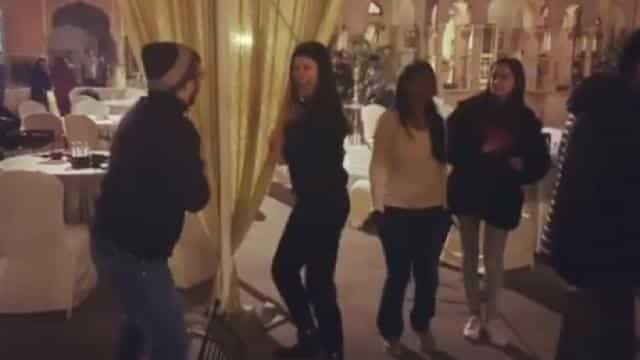 Bollywood’s beautiful actress Sushmita Sen is in discussion about the web series Arya. With this series, she is returning to the acting world after a long time. Arya’s trailer has been released some time ago, which was very much liked. Now his fans are eagerly waiting for the series to be streamed. Meanwhile, a new video has surfaced of Sushmita, in which she is seen doing tremendous dance.

This video has been shared by Sushmita on her Instagram account. In it, she is dancing to the song Aankh Mare from Ranveer Singh’s film Simba. Not only this, his web series Arya’s team is also dancing with him. The actress shared the video, writing, “Introducing Sandeep, Arya’s Creator-Co-Director. A brilliant director who forced everyone on the set to dance all day. Now after the packup we Getting them to dance.

This video of Sushmita is being liked a lot. Fans are fiercely liking and sharing videos. During an interview recently, Sushmita said that she is very excited about this series. She says this is the story of a mother who is willing to go to any lengths to protect her children.

“Arya represents all the weaknesses in a world full of strength, hard resolve and guilt, a world driven by men. For me personally, this is a story of family, betrayal and a mother who wants to protect her children. Willing to go to any length. ” He said, “It took me a decade to get this kind of role and I am thrilled to be a part of this incredible story. I am thankful to Ram Madhwani and his team for giving me such a lifetime role.”