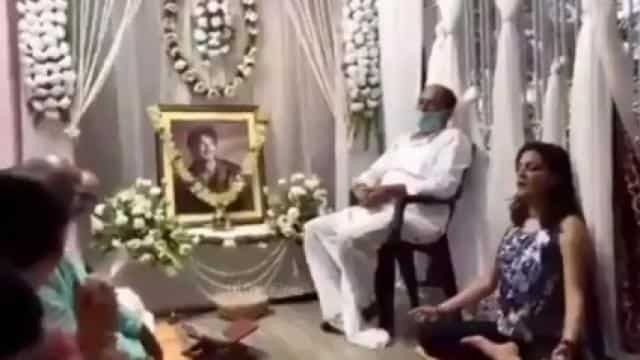 Since the death of Sushant Singh Rajput, everyone has been sharing videos and photos related to him. Earlier, his father’s photo from Sushant’s Prayer Meet was revealed and now a video of this Prayer Meet has also surfaced. In this video Sushant’s family is praying for peace of the actor’s soul.

In the video you will see that Sushant’s father is sitting in a chair. His sister and the rest of the family are sitting down there.

Sushant’s death is the biggest shock to his father. He has been severed since this accident. Recently, Sushant’s father KK Singh spoke about Sushant in an interview. He said that Sushant was very talented from the beginning. Talking about Sushant’s funeral, KK Singh said, “Many people had come to the funeral, but Kriti Sanon had come to me. We did not talk, but she kept speaking and we kept listening ‘.

He said, ‘At first we could not find out because everybody was wearing a mask, but then someone told me that it was a masterpiece then we came to know. Kriti was praising Sushant and used to say he was a cute boy ‘.

He also gave information about Sushant’s marriage plans. He said, talked to her about marriage. He had said that he would not marry in Corona. I have a film to be released right now. Then see in February-March. This was my last thing with her about marriage.

During this time, KK Singh did not say which girl Sushant wanted to marry. He told that we had told Sushant that he should marry a girl of his choice, as he has to spend his life with her.