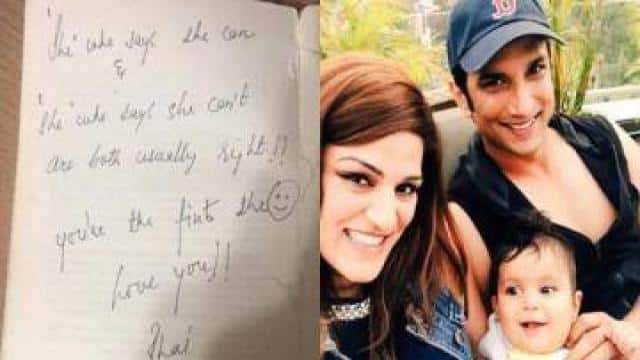 Since the death of actor Sushant Singh Rajput, posts, photos and videos related to him are coming out. Meanwhile, one of his posts is going viral which he wrote for his sister. Actually, Sushant wrote a special note for his sister with his hand which was a motivation message.

The special note is written by Sushant, which girls say they can do and which they say they can’t, usually both are correct. You are the first one of these. Love You…! Brother Sushant.

For information, let us know that recently Vishant Kirti, the brother-in-law of Sushant Singh Rajput, launched Nepometer. This would give film projects a rating of how nepotistic the crew associated with it were. Vishal Kirti wrote in his tweet, “Made by my brother Mayuresh Krishna in memory of Sushant Singh Rajput”. Regarding Nepometer told on social media, fight Bollywood Nepotism with information. We will rate the film’s crew according to how nepotistic and how independent it is. If the nepometer is high, then it is time to boycott nepotism from Bollywood.

Let us tell you that Sushant Singh Rajpatu committed suicide by hanging himself in the house on the morning of 14 June. Mumbai police is investigating his death. Many people have been questioned so far. However, the final postmortem report has revealed Asphyxia as the cause of Sushant’s death. This means that the body is not getting enough oxygen. The family and fans have been very inconsolable since the actor’s death. Sushant was the only son of his family, Sushant, the only brother among four sisters, was born after a lot of vows.

Changes in TDS Form, no tax deduction will also have to be given

Sonam Kapoor’s bold look in the latest photoshoot, it was difficult to remove eyes