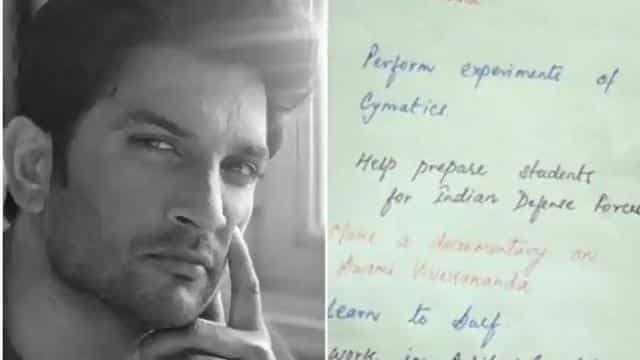 Bollywood actor Sushant Singh Rajput committed suicide by hanging himself in his apartment in Bandra on Sunday (14 June). He was 34. The cause of Sushant’s suicide has not been revealed yet, but sources in Mumbai Police say that some medicines were found from his flat, which suggests that he was undergoing treatment for depression for the past few months. So far no suicide note has been found from his room.

DCP Abhishek Trimukhe says, ‘No suspicious items have been found from Sushant Singh Rajput’s house, we are waiting for the post-mortem report.’

8. Chart trajectories of Moon, Mars, Jupiter & Saturn for a week
9. Dive in a Blue-hole
10. Perform the Double-Slit Experiment
11. Plant 1000 Trees
12. Spend an evening in my Delhi College of Engineering hostel
13. Send 💯 KIDS for workshops in ISRO / NASA
14. Meditate in Kailash pic.twitter.com/x4jVGp4UJS

Sushat wanted to teach computer coding to blind people, from flying the plane. He wanted to buy a Lamborghini car. Apart from this, he also wanted to contribute to the environment and was preparing to plant 1000 trees. In this list, he wanted to travel by train to Europe. He wanted to prepare the students for the defense force, to train the women in self-defense and to do many things like learning Kriya Yoga.

Learn how to Farm
36. Teach dance to kids
37. Be an Ambidextrous Archer
38. Finish reading the entire Resnick – Halliday physics book
39. Understand Polynesian astronomy
40. Learn Guitar Chords of my fav. 50 songs
41. Play Chess with a Champion
42. Own a Lamborghini pic.twitter.com/bnVoLcFaij

Now do not know how many Sushant left his dreams incomplete. Sushant was last seen in the film ‘Chichhore’. The film was well received by the critics and the audience.