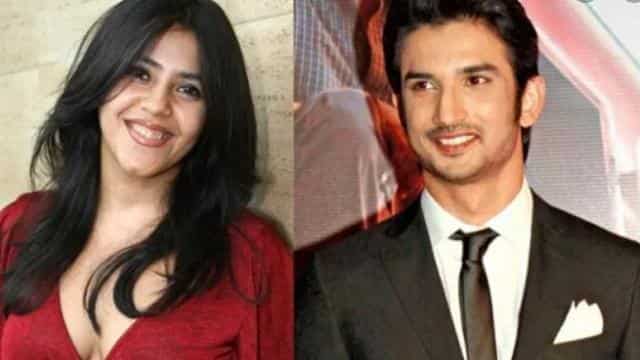 Bollywood actor Sushant Singh Rajput has committed suicide by hanging himself in the house. His servant called the police about this. The police is investigating Additional CP Manoj Kumar of Mumbai Police has confirmed the suicide of Sushant Singh Rajput from Madhu Pal. The reason for Sushant’s suicide has not been revealed yet, but sources in Mumbai Police say that some medicines have been found from his flat, which suggests that he was undergoing treatment for depression for the past few months. So far no suicide note has been found from his room and the body has been taken to the hospital for post-mortem.

On social media, the silence of the news of Sushant Singh Rajput’s suicide spread. The Bollywood industry is also in shock. Recently Ekta Kapoor shared a screenshot, in which Sushant Singh Rajput had commented and thanked her last week. Let me tell you that Ekta Kapoor used to call Sushant as Sushi. She shared the screenshot and wrote that Sushi, you did not do well. All changed in a week. Good thing baby.

According to reports, when the door of Sushant’s room was broken, he was found hanging from the noose in the room. The servant then called the police and informed them. According to the police, Sushant Singh Rajput had made a noose in his room with a green cloth, hanging from which he committed suicide. His body has been brought to Cooper Hospital, where the autopsy will be done shortly.

As soon as the news of Sushant’s death came, the whole Bollywood and his fans came in can. Crowd has gathered outside the society in which Sushant resided in Bandra. Many actors, politicians and fans are paying tribute to Sushant through social media. Significantly, his former manager, 28-year-old Disha Salian committed suicide by jumping from a building in Malad on 8 June.