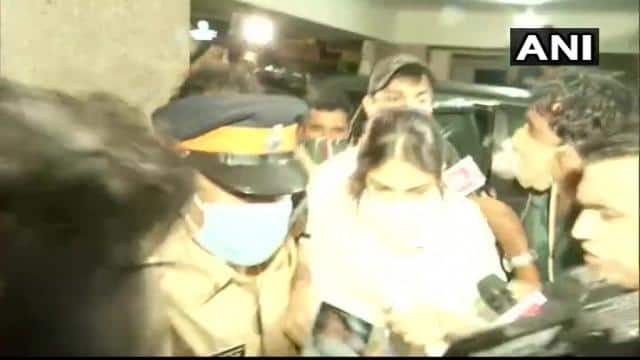 After CBI interrogation, Riya Chakraborty went straight to the Santa Cruz police station, where she demanded police protection. Subsequently, Riya accompanied a Mumbai police employee to drop him home. After getting off the car, the media persons there asked many questions to the actress, but Riya did not answer any questions.

According to reports, the CBI asked Riya on 8 June 2020. Apart from this, the CBI is being asked to ask questions about Riya’s relationship with Sushant and meeting him. The investigating agency asked Riya Chakraborty many questions ranging from her and Sushant’s Europe Trip.

According to an official, actress Riya Chakraborty reached the DRDO guest house on Friday morning for questioning by the CBI. The official said that Riya was summoned by the agency to appear before the investigation team at 10:30 am on August 28.

Riya Chakraborty has the sword of arrest in Sushant Singh Rajput’s death case. Meanwhile, on 27 August 2020, Riya responded to all the allegations against him in a conversation with a news channel. Riya told Sushant that he was struggling with depression and she was helping him get out of it. Apart from this, Riya claimed that the late actor’s relationship with his father was not good. Explaining the reason behind this, he said that Sushant was hurt when his father left his mother. Explain that actor Sushant Singh Rajput was found dead at his Mumbai residence on 14 June 2020.

Riya Chakraborty, who is facing several serious charges in the Sushant case, had on Thursday demanded protection from the Mumbai Police. He shared the video of his father on social media and sought police protection. Riya wrote that this is a video inside my building compound, the person seen in this video is my father Indrajit Chakraborty (Retired Army Officer). We try to get out of our house to co-operate with ED, CBI and all the Investigation Authority. My life and my family are in danger. We have informed the local police station about this, even gone there, but we were not given any help.

Sadak 2: Mahesh Bhatt’s film Road 2 did not like the audience, said- don’t waste your time