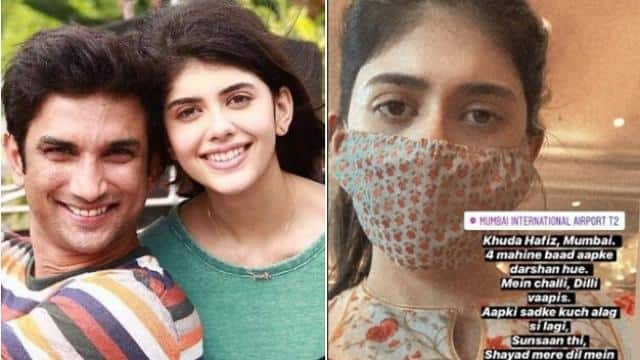 Mumbai Police is investigating in Sushant Singh Rajput case. On June 30, Mumbai Police recorded the statement of actress Sanjana Sanghi. After making a statement to the Mumbai Police, on Wednesday i.e. Wednesday, Sanjana has left for Mumbai from Delhi. Sanjana has written a message that is going viral on social media by sharing a photo of herself on the go.

Sanjana shared her photo wearing a mask and wrote, ‘Khuda Hafiz, I went back to Delhi. The road to Mumbai looked somewhat different. It was deserted, maybe the sorrow in my heart is changing my perspective or maybe you are also in some sorrow. See you soon or maybe not.

According to police sources, Sanjana Sanghi said that her first meeting with Sushant was on the set of the film Dil Bechara. The casting director for this film was chosen by Mukesh Chhabra. After arriving on the set, it was revealed that I am the opposite of Sushant Singh Rajput in the film. In the Meitu case, Sanjana said that she had not accused Sushant Singh Rajput nor any such incident had taken place.

Sanjana said that in the year 2018, someone had sparked a rumor that Sushant had wrongly touched me during the shoot. At that time I was in America and I had no idea about this. I got this information after coming back from America, after which I told on social media that this was a false story, nothing had happened. Sushant was definitely upset during this time. There was a conspiracy to discredit him. During the shooting of ‘Dil Bechara’, Sushant took some time to recover after the allegation through Meitu.