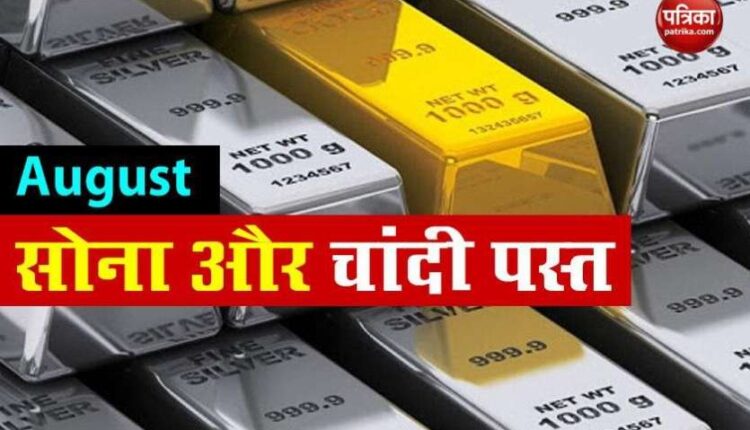 new Delhi. In the month of August, there has been a decline in the price of gold and silver. Especially since August 7, this decline has increased. In the domestic futures market, both gold and silver price had made its light time high. Since then, gold and silver have become quite cheap after a lot of ups and downs. If compared to today’s minimum level, gold has become cheaper by about Rs 6400. While the silver price fall has seen a fall of about 15 thousand rupees. Even today, gold is trading very ups and downs since morning. Let us also tell you what kind of business gold and silver are doing in the last one month.

Silver battered in August
There has been a tremendous fall in the price of silver in the month of August. On August 7, the price of silver was at its highest level of Rs 77,949 per kg. After which there was a continuous decline. Today, silver fell to the lowest level of Rs 63,153 per kg. If we see the decline of these 20 days, then it has been Rs 14,796 per kg. While the average daily decline has been seen at Rs 750 per kg. If we talk about the current time, it is Rs 108 per kg with a rise of Rs 64,115 per kg at 3.25 pm. What do you know?
Ajay Kedia, director of Kedia Advisory, said that in the month of August, there has been pressure of Corona vaccine on the price of gold. At the same time, the vaccine of Russia can come in the market soon and the vaccine of US and UK is continuing in the second trial phase. Due to which the economy and stock markets of the country have seen a lot of pressure and there is pressure on gold and silver. Gold and silver may become cheaper in the coming days.