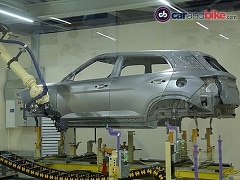 After a nine-month period of decline in the domestic vehicle market, the vehicle market ended in August. Passenger vehicle sales during this period grew by 14.16 percent to 2,15,916 units as against 1,89,129 units in the same month last year. Domestic vehicle The Society of Indian Automobile Manufacturers (SIAM), an association of manufacturers, released data in this regard on Friday. According to SIAM, in October last year, passenger vehicle sales had registered a slight increase after a downward trend of 11 months, whereas in August this year, the decline in passenger vehicle sales has now come to a halt after nine months.

Maruti sales up 17 percent at 1.24 lakh units in August

SIAM’s newly appointed president Kenichi Ayukawa said, “We have started realizing growth in the vehicle market again.” This has boosted the confidence of the auto industry, especially in the two-wheeler and passenger vehicle categories, ”he said. However, the current sales growth in August is seen because vehicle sales were down significantly in the same month last year. During the year 2019, there was a decline of 32 percent in the passenger vehicle category and 22 percent in the two-wheeler category during August.

SIAM Director General Rajesh Menon said that the automobile industry is hopeful of improving the market and industry again due to increase in shopping in the upcoming festive season. According to SIAM data, the country’s largest carmaker Maruti Suzuki India grew by 21.32 percent to 1,13,033 vehicles in August. Sales of its rival Hyundai Motor India also rose 19.9 percent to 45,809 vehicles. Mahindra & Mahindra sales were up 1.09 percent to 13,651 vehicles, Kia Motors rose 74.07 percent to 10,853 vehicles and Renault India’s 41.3 percent to 8,060 units. Sales of Hero Motocorp, the country’s largest two-wheeler company, increased 8.52 percent to 5,68,674 vehicles, Honda Motorcycle & Scooter India grew marginally to 4,28,238 units and Bajaj Auto grew three percent to 1,78,220 units. Sales fell slightly on an annual basis to 2,18,338 vehicles during this period.

‘Nattu Kaka’ has 8 knots removed from its neck, the actor said – I trust God