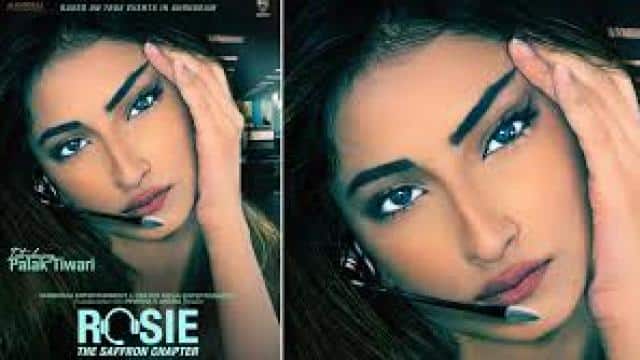 Shweta Tiwari’s daughter Palak Tiwari, who is a famous television actress and winner of ‘Bigg Boss 4’, is sitting ready for her Bollywood debut. Palak Tiwari is going to enter the acting world with the film ‘Rosie: The Saffron Chapter’. The film will be directed by Vishal Mishra while the film will be produced under the banner of Mandira Entertainment and Oberoi Mega Entertainment Association. Palak Tiwari himself has given information about making a tweet in Bollywood from his Instagram account. While sharing the film’s poster, Vivek Oberoi has confessed to launching Palak in Bollywood.

Sharing the first look of the film from his Instagram account, Palak Tiwari wrote that, ‘I am very excited while sharing the news of my debut in Bollywood with the film Rosie, this is the first poster of my film’.

At the same time, Vivek Oberoi shared two posters of the film on his Twitter account, he has informed about the launch of Palak. Vivek shared the poster and wrote, “We are very happy to launch our mystery girl, Palak Tiwari in the role of Rosie.” Our horror thriller franchise is based on the true stories of Gurugram. It has been directed by Vishal Mishra.

While releasing the poster of the film, no information has been given about its release date whether the film will be released this year or next year. She will be seen playing the lead role in the film. Palak is seen in a glamorous look in the film’s poster.

Ayushman Khurana will be seen in the role of an athlete, handshake with ‘Kedarnath’ director Abhishek Kapoor

Please tell that Palak is very active on social media. She sometimes makes headlines with her new photoshoot, and sometimes makes fans crazy with her glamorous videos. Recently, Shweta Tiwari’s daughter Palak Tiwari shared a new video from her Instagram account, in which she was seen in a very glamorous look.

Anupreet Kaur Feb 25, 2021
New Delhi. After the Union Budget, now the market is getting support from the budget of the states. This week the…