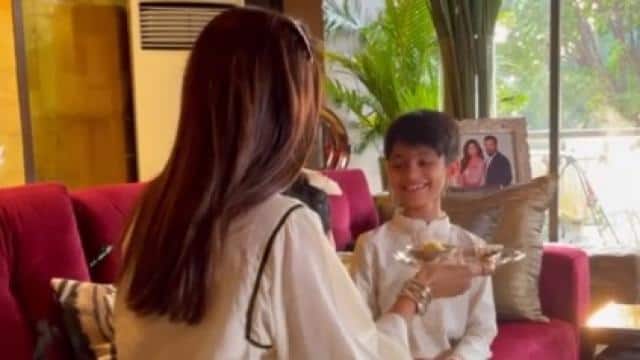 Today, the festival of Bhai Dooj is being celebrated all over the country. This is the first brother Dooj of Shilpa Shetty’s daughter Samisha. Shilpa has shared the video in which Samisha is celebrating Bhai Dooj with Vian. During this time, all three are wearing white color outfits. Samisha, with the help of her mother, is taking out the brother’s aarti and then Vian hugs them.

While sharing the video, Shilpa wrote, ‘Mere Dil Ke 2 Part Vian and Samisha 1st Brother Dooj are celebrating. My son’s younger sister’s dream is fulfilled. He is very happy and it is clearly revealed by his smile.

Recently, Shilpa talked about her Motherhood Experience. Also, he also told how he reacted when he became a mother at the age of 45.

Shilpa said in Neha Dhupia’s show No Filter, ‘Yoga has brought a lot of changes in me. I remember when I was born and I was a mother for the first time. There were a lot of difficulties at that time, but now things seem easy.

Shilpa further said, ‘I have guts that at the age of 45 I became the mother of another child. When I turn 50, Shamsha will be 5 years old. I do not pay much attention to what others say. As a mother, I give my best in what I can. ‘

Know quickly what happened to the price of petrol and diesel after a long weekend?