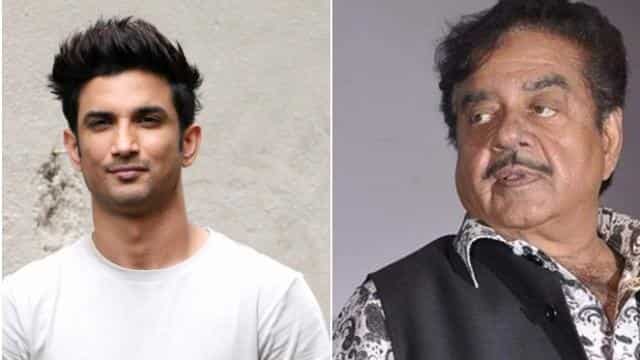 The death of Sushant Singh Rajput has shocked everyone. Bollywood celebs are shocked to hear the news of Sushant’s suicide. Nobody is convinced that young and talented Sushant can take such a step. Now Shatrughan Sinha’s reaction about Sushant has come to the fore.

Speaking to a website, he said, ‘There was a lot of commonality between us. We are both from Bihar. He came into this industry without a godfather and did a great job. I met him once. When he came to meet me, he met me very respectfully. I used to respect him a lot and I knew that if he gets the support, support and blessings of the people, then one day he will become a very big star ‘.

On Sushant’s suicide, Shatrughan said, “He had to talk openly.” If he was in trouble and some people were bothering him, then he had to openly talk about those people. He should have fought them ‘.

Sushant’s bones flowed in the Ganges

On Thursday, Sushant’s ashes were flown into Patna’s Ganges river and were given a final farewell. Amid Vedic chanting, his father KK Singh immersed the bone remains with trembling hands. The father was accompanied by Sushant’s elder sister Shweta Singh Kirti, Priyanka Singh and Rani Singh and other close family members.

Film on the life of Sushant Singh Rajput, poster revealed

On Thursday morning, her elder sister Shweta Singh Kirti wrote a post on Facebook informing her of her involvement in bone immersion. He wrote, I also want to thank those who prayed for us. Today we will do bone immersion of brother. I would like all of us to pray for him and cherish his memories. Celebrate her life and give her a lovely and happy Farewell.

Video: Nora Fatehi did a hot dance on summer song, created a stir on social media