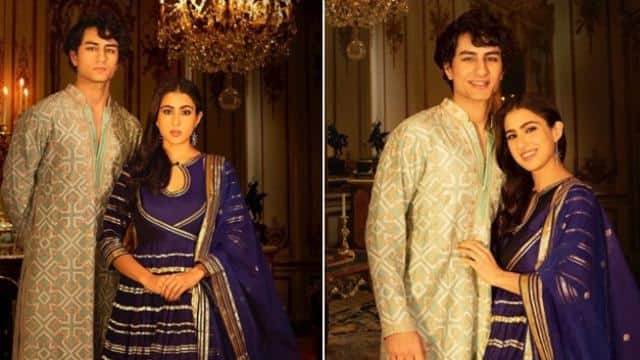 Today, the festival of Bhai Dooj was celebrated across the country. Bollywood celebs also posted specials for their brothers and sisters on this occasion. Sara has also written a special message for him on this occasion by sharing a photo with Ibrahim. Both the siblings are seen in a traditional look in the photos Sara has shared. Sara is wearing a blue and golden color suit and Ibrahim has a kurta-pajama in cream color. The two brothers and sisters look very cute together.

Sharing this photo, Sara wrote, ‘Happy Bhai Dooj to all brothers and sisters. Missing you Ibrahim. Looking forward to bothering you again. ‘

Please tell that Ibrahim loves acting like sister Sarah. A few days ago Sara was asked about her brother’s Bollywood entry, he said, “Ibrahim wants to come to Bollywood, but first he will complete his studies. Only then can he think of becoming a professional actor.

Sara had said that he would first go abroad to study the film, then decide when to enter.

Sara was again asked if she would launch her brother, she said, ‘I don’t know if I will launch her or not. This may be an option, but the film career is quite large. By the way, Ibrahim is excited to get into films.

In an interview, Ibrahim had said about sister Sara, “There is a difference of about 5 years between us, but we love each other very much and live the moment openly. We are also friends of each other. ‘

Talking about Sara’s professional life, recently news came that Sara may soon be working with Ayushmann Khurrana. The film may go on floors in 2021.

Recently Sara Ali Khan was spotted in Mumbai with the script. She is said to be negotiating the script with Dinesh Vijan.

Sara earlier film ‘Coolie no. 1 ‘will be seen opposite Varun Dhawan. The film was not released due to Corona virus. Apart from this, he was the director Anand L. Rai’s film ‘Atrangi Ray’ is all set to shoot. Akshay Kumar and Dhanush will be seen with him in this film.

Swadhar Greh Scheme: Destitute women will get roof to live with employment, know how to avail