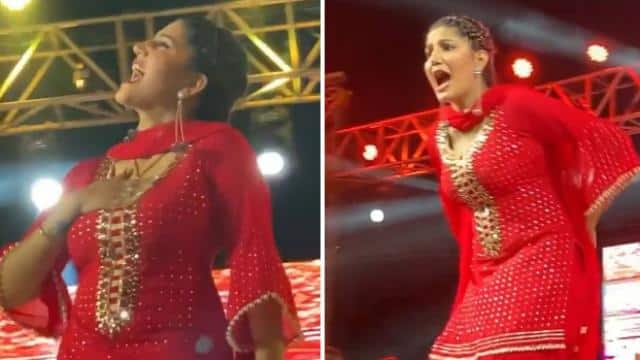 Desi Queen Sapna Chaudhary’s songs are well liked on YouTube. Recently, Sapna Choudhary is seen rocking even after becoming a mother. His second song ‘Nalaka’ has been released after singing ‘Kattle Karegi Re’ last week. This song released by Sonotech also mentions Sunny Deol. The song also mentions Sunny Deol several times and one of his scenes from the movie Gadar is shown in this song. The song, released on Sunday, has been watched by millions of people so far. Sapna Chaudhary is seen acting in this song.

The song features Sapna Chaudhary as daughter-in-law, whose husband asks them to fetch water and she seems to be avoiding this task on her mother-in-law. Finally, when she has no excuse, she says, ‘Lega Nalaka Paad Sanni Deol, I fetch water. The song begins with this. In this song, Mohit Jangra is seen acting with Sapna Chaudhary. Sapna Chaudhary’s dance videos often go viral on social media. Many of his songs have views in millions.

Sapna Chaudhary, who has entered from Bigg Boss season-11 to Bollywood, is popular in large areas of Hindi speaking area including Delhi, UP, Rajasthan besides Haryana. Sapna Chaudhary, who became a mother in October, married her boyfriend Veer Sahu in January this year.

However, her marriage was revealed only after fans became her mother. According to his mother, due to the death of a family of Sapna’s husband Veer Sahu, the wedding was organized in a very simple and private ceremony. Apart from songs on YouTube, Sapna Chaudhary is known for stage performance.