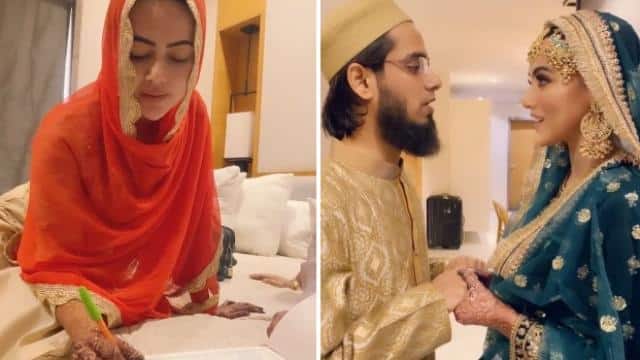 Actress Sana Khan has married Mufti Anas last month after saying goodbye to the industry. Sana Khan has shared a video on social media after the wedding is a month old. He has described the decision of Mufti Anas with Nikah as the best decision.

Sana Khan writes, “Last month, on this day, I said Qubool Hai. Today it has been a month, just go out laughing like this. I have taken the best decision of my life. My mother-in-law made this scarf for me. “

Sana often shares photos and videos with Anas. After marriage, Anas and Sana’s pair were described by many as mismatched. After this Anas Saeed gave his response on this.

During the talk of ETimes, Anas Syed said that people are free to think that our pair is mismatched. He said, “I prayed to God that I want to marry Sana and he listened to my prayers.” I think if I married someone else, I would not be so happy. ”

He adds, “Sana is sociable and clean hearted. I have always wanted to marry a girl who fulfills me. People still think how I got married to an actress, but these are people of small thinking. This is my life and no one should comment on it. People are free to think that our pair is mismatched, but only we know how friendly we are to each other. ”