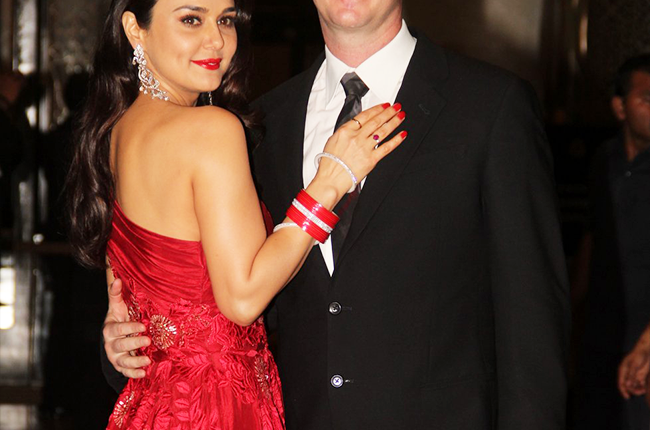 The perennial debate on actor Salman Khan’s bachelor tag seems to end soon. And the reason good enough to speculate it was actress Preity Zinta’s wedding reception. Though the actor attended the function on Friday evening with his alleged ladylove Iulia Vantur, the duo reached the venue in separate cars. While Salman Khan came alone in his car, Iulia reached in another car with Khan’s sister Alvira Khan and Atul Agnihotri.

Dressed in shimmery blue gown, Iulia looked gorgeous; while Salman adorned a blue suit. Rarely noticed, but if tried, one could easily grab the colour similarity in their outfits.

This was the ideal gathering to introduce the Bollywood fraternity with his ladylove. With no official comments on their relationship, their first appearance together at such event was adequate to answer queries. After spending quality time at the reception, the duo left separately.

Few days ago, Iulia Vantur was spotted accompanying Salman Khan’s mother Salma Khan at the Mumbai airport as they returned from a visit to Punjab. Unlike earlier, Salman and Iulia have now been spotted together quite frequently.

The 50-year-old actor recently completed shooting of the much-awaited film Sultan featuring Anushka Sharma, Randeep Hooda, and Amit Sadh. Director Ali Abbas Zafar shared pictures of Salman from the last day of shoot and wrap-up party. The actor portrays the role of a wrestler in the film.

Romania-based Iulia Vantur is a television presenter, actor, and model. Reportedly, the love story of the duo began when Salman was in Romania for the shooting of Jai Ho. They met and bonded quite well.