Saif Ali Khan was resting at home, son Taimur started having fun lying on his back, see photo 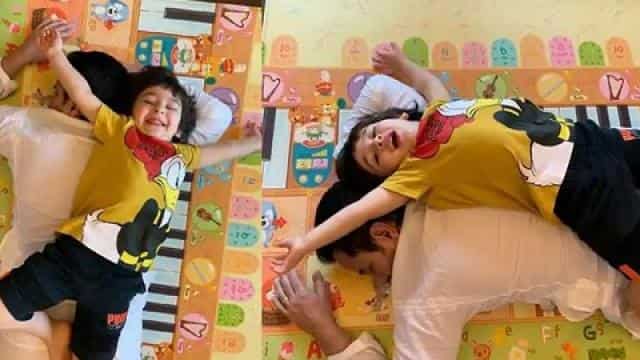 The Bollywood industry is at a standstill due to Corona virus. In this case, celebs are spending time with family at home. Well, celebrities stay connected with their fans by sharing something on social media. Meanwhile, actress Kareena Kapoor has shared a cute photo of husband Saif Ali Khan and son Taimur.

In this photo, Timur is seen having fun with his father Saif. In the photo, Saif is seen resting on the mat and Timur is lying on his back. Saif and Taimur’s bonding is clearly seen in the picture. While sharing these two photos on her Instagram account, Kareena wrote, Saif said that I will always support you. Tim accepted this to be true.

When Alia Bhatt told Ranbir Kapoor – I LOVE YOU, the video going viral

Talk about Kareena’s work front, she will be seen in Aamir Khan’s film Lal Singh Chadha. Kareena and Aamir’s first look from the film has been released. It is a Hindi remake of the Hollywood film Forrest Gump. The shooting of the film has been stopped for the time being due to Corona virus.