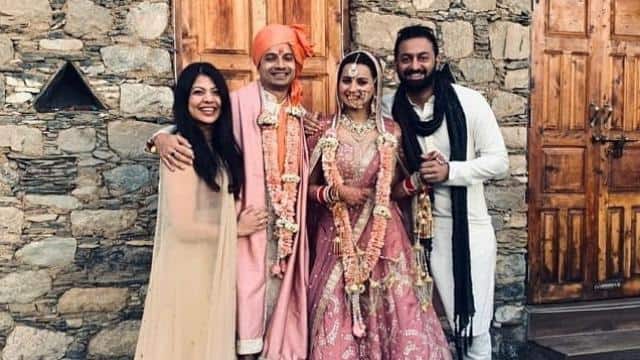 ‘Robin’ aka Priyanshu Penyuli of web-series Mirzapur 2 has tied up with girlfriend Vandana Joshi. Both have taken seven rounds in Dehradun on Thursday. The first picture of Priyanshu’s wedding has been revealed on social media. In the photo, the newly groomed bride and groom are posing with their friends. In the picture, Vandana Joshi is seen wearing a pink colored lehenga, while Priyanshu is also wearing a pink sherwani.

In another photo, Vandana, Priyanshu is seen wearing a garland. Wedding photos of ‘Robin’ of ‘Mirzapur-2’ have gone viral on social media. Now fans are waiting for more wedding photos. Before this, photos of both mehndi, turmeric and music were revealed. Recently, a black and white photo of Vandana Joshi went viral, in which she was wearing mehndi on her hands and she was seen posing in the camera.

She did heavy jewelery with a printed lehenga. While posting the photo, Vandana wrote, “And it has begun, Mehndi Wali Raat.” Priyanshu commented on Vandana’s photo, writing, “Well, this time is very beautiful.” Along with this he had made many emojis.

Inflation of petrol and diesel hit the common people, know how much weight was lost in your city today