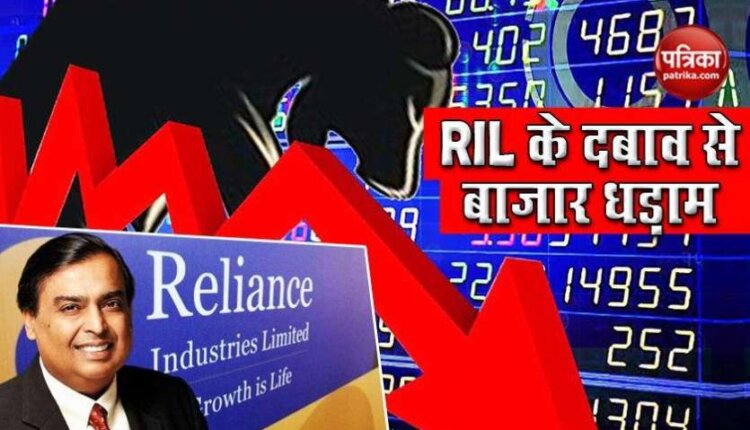 new Delhi. Today, the impact of Reliance Industries Share Price and Corona virus was seen in the shares of Reliance in the Share Market. On the other hand, the poor figures of auto companies also played an important role in bringing down the market. Because of this decline, Reliance’s market cap has suffered more than Rs 50 thousand crore. Let’s look at the stock market first.

stock market crash
Today the stock market closed with a big fall. The Bombay Stock Exchange’s flagship index Sensex lost 421.82 points to end at 38071.13 points. On the other hand, the National Stock Exchange’s major index Nifty 50 closed down 11202.85 points, down by 97.70 points. Small and medium companies managed to close on the green mark. The BSE small-cap closed at 54.93 points and the BSE mid-cap 93.63 points higher. Foreign investors’ index CNX Midcap closed up 74.90 points.

Reliance shares down 4 percent
Today, Reliance Industries shares have fallen by 4%. According to experts, the shares of Reliance have fallen due to profit recovery. The special thing is that the company’s quarterly results are coming soon. According to the data, today Reliance shares closed at Rs 2095.85 per share, down 3.75 per cent on the BSE. Whereas the stock opened at Rs 2180 per share today, which had gone up to today’s high of Rs 2185.20. Whereas the shares of the company had plunged to Rs 2071 today.

Also read: Real estate shattered by Corona, 52% decline in house sales in first half of year

These stocks also fall and rise
Talking about the first rising stocks, Dr. Reddy Laboratories saw a gain of 6.19 percent today. On the other hand, shares of IndusInd Bank rose 4.47 per cent, Tata Steel 4.25 per cent, Grasim Industries 3.36 and Bharti Infratel 3.15 per cent. Talking about the declining shares, apart from Reliance Industries, Nestle India 2.91 per cent, HCL Technology 2.53 per cent, Mahindra & Mahindra 2.5 per cent and Hero MotoCorp shares have fallen by 2.16 per cent.