Reuters Survey: The general public may again face a strong shock of inflation 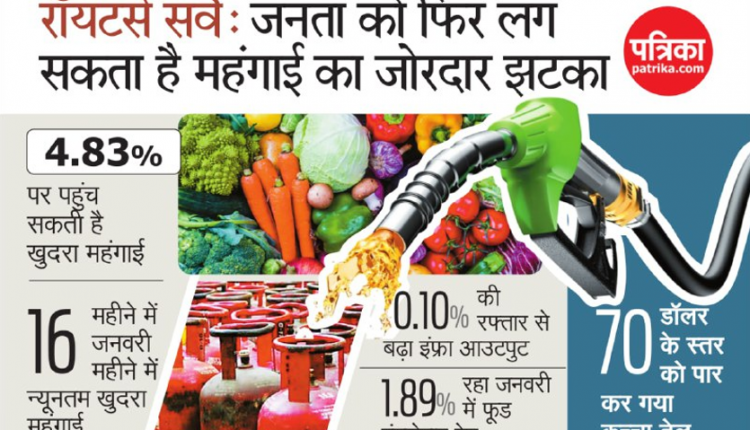 New Delhi. In the coming days, the common people may once again face the shock of inflation. We are not saying this, but a survey is confirming this. According to the Reuters survey, retail inflation is expected to rise to 4.83 per cent in February. Earlier, the inflation rate in the month of January was 4.06 percent.

The survey said that apart from petroleum, the impact of the rise in food inflation is also visible. At present, the rate of petrol and diesel is touching the sky. Petrol is being sold at Rs 100 per liter in many cities of the country, while crude oil has crossed the $ 70 level for the first time in a year. RBI Governor Shaktikanta Das also said that if the price of petrol and diesel is not controlled, the transportation cost will increase and retail inflation will accelerate.

Kitchen budget is deteriorating –
Kitchen budgets will be difficult for people due to the rise in retail inflation. In the last one month, the price of LPG gas has increased by Rs 125. There was no rise in the price in the month of January, but in December its rate jumped by 100 rupees. As the price of crude oil is increasing, due to this, there is a possibility of further increase in the rate of petrol and diesel in the coming days. This will increase the pressure on retail inflation.

How much will the gold fall and is it the right time to buy gold, know 10 important things