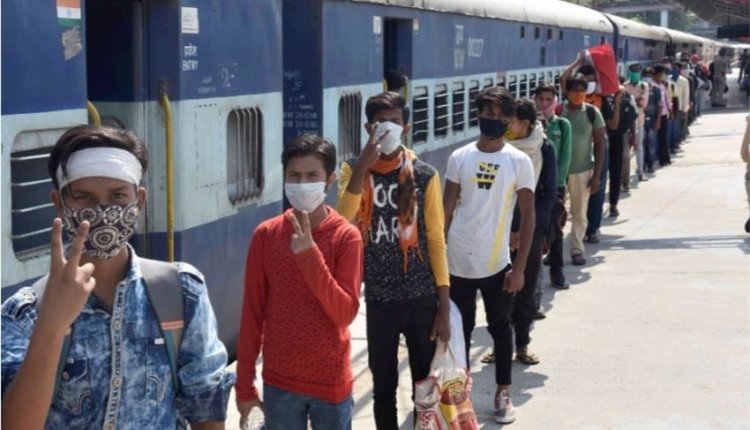 The risk of coronavirus is increasing all over the country. Earlier, where the maximum impact of the infection was spread in urban areas, now people have started fearing its arrival in rural areas. As the pace of return of migrant laborers from Bihar to Odisha and Telangana to Karnataka is increasing, so is the danger of reaching Coronavirus’s home with them. In such a situation, another challenge has been faced by the states to stop the epidemic.

According to the records, from May 4 to May 13 in Bihar, samples of 4275 migrant laborers were collected through labor special trains. Of these 320 test reports have come positive, ie the rate of infection among migrants is 7.5 percent. Whereas, only 2.75 percent people have received positive test reports in the samples gathered all over Bihar. Bihar has conducted more than 35 thousand tests so far and has got 953 case positives.

The biggest worry for Bihar is that a large number of migrant laborers are from this state and all are yet to return. Today, 10 thousand people are reaching the state from the 6 interstate borders of Bihar, whose testing is yet to be started.

What is the situation with Coronavirus in Bihar, click here to know…

Due to such a large number of migrant laborers getting infected, the estimated time of doubling of corona cases in Bihar is 8.5 days, which is much less than the average of 12.65 days of doubling of corona cases in the country. In the neighboring state of Bihar, Odisha also saw a rise in cases of infection due to the large number of migrants arriving. In Ganjam district, 249 positive cases have been reported in 10 days since May 5.

In Andhra Pradesh, the test report of 105 people who came from outside got positive in these 10 days. This is about 12.20% of the total active cases of the state. Of these 105 cases of Andhra, 67 have come from Maharashtra, 26 from Gujarat, 10 have returned from Odisha, while West Bengal and Karnataka also have 1-1 cases.

Talking about Bihar, analysis of samples collected from migrant laborers shows that out of 365 returned from Delhi, 76 people got positive. In addition, 68 out of 506 returned from Maharashtra, 88 of 1066 returned from Gujarat, 11 of 101 returned from West Bengal and 10 of 172 returned from Haryana are infected. On this, Bihar’s Chief Health Secretary Sanjay Kumar says that we do not have any problem with the population living in Bihar itself, because even after door-to-door screening, we have to raise 4000 samples out of 10.40 crore people. The challenge before us is to protect this population from the infection of migrants returning from outside.