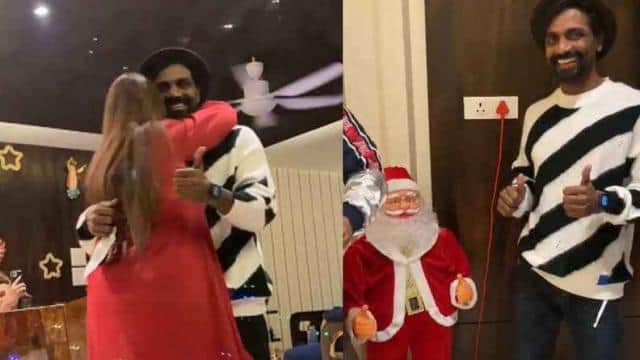 Famous Bollywood choreographer Remo D’Souza celebrated Christmas at home with family and friends. A video of this celebration has been shared by actor Aamir Ali on a social media account, in which Remo looks much healthier than before. In the video, he can also be seen dancing with Aamir Ali and Santa Toy. It is known that Remo was admitted to the hospital after a heart attack. He has recently recovered and returned home.

Apart from this, Aamir has shared a video on his Insta Story in which Remo is seen doing a romantic dance with wife Liezel. Remo has congratulated fans and friends on his Instagram account. He glimpsed his decorating home at Christmas. Remo wrote in the caption sharing the video, “This is the best Christmas for me. Liezel I can’t call you Thanks because it’s a very short word. Thanks to all my friends, family members and Merry Christmas. ”

Remo D’Souza’s wife Liezel asked Salman Khan for support, said thank you, you are an angel

At the same time, on the occasion of Christmas, Liezel has done a photo of her, in which she is seen hugging husband Remo D’Souza. She wrote in the caption, “My best Christmas gift ever. I will cherish this moment forever. After one week’s worst emotional ups and downs, I am hugging you. ”

Neha Kakkar told- I had made Rohanpreet’s ex girlfriend before marriage unfollowed, so she composed the song

“I knew only one thing and I was confident in the promise that you asked me to return as a fighter.” With this, Liezel has thanked Salman Khan. He wrote that I heartily thank Salman Khan, who supported us in this difficult time. you’re an angel. Thank you very much for supporting us. ”

Before Nikah Gauhar Khan did makeup for Zaid court, this video will win your heart