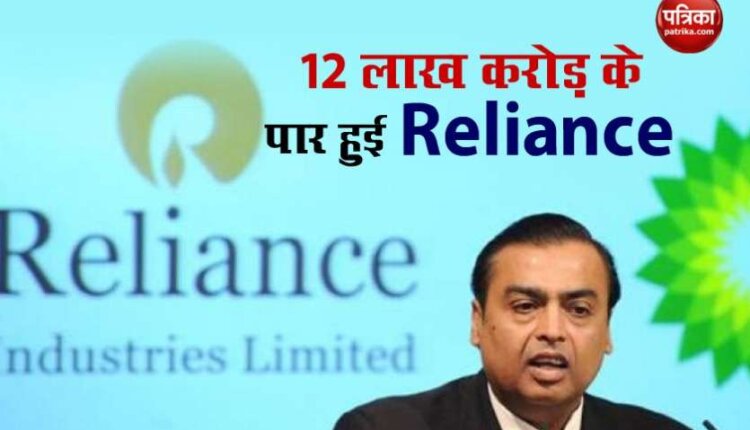 new Delhi : Reliance Industries Ltd of Mukesh Ambani made a new launch on Monday and its market capitalization crossed 12 lakh crore. The country’s largest company, Reliance shares, saw a record rise from the beginning of trading today. Reliance Share touched an all-time peak of Rs 1858 on the National Stock Exchange. The market valuation of the company at the closing of the market was estimated at Rs 12 lakh 16 thousand crore.

The first company to touch the 12 lakh crore mark-

Reliance is the first company to have touched the 12 lakh crore mark. No company in the country has achieved this status at the moment. On Monday, the purchase of more than 16 million shares of Reliance was sold on the National Stock Exchange.

It was announced on June 19 that debt-free You know that on June 19, before the target was announced to be completely debt free. On the same day, the market capitalization of the company crossed the 11 lakh crore mark.

In the last two months The Reliance Group has raised about Rs 1.17 lakh crore by selling stake in Jio Platforms. The rights issue was also oversubscribed by the company and under this the company collected Rs 53,124.20 crore from the market. The company wants to use this amount to expand digital business and Geomart and reduce debt.

The 12th foreign investment was announced on Friday. Since then, the company’s shares have seen tremendous boom. Mukesh Ambani’s company has announced the sale of 0.39 per cent stake in its digital services to US semiconductor giant Intel’s investment arm Intel Capital. The deal is done for Rs 1,894.50 crore.

Opportunity to invest in Sovereign Gold Bond Scheme, know what is the issue price, interest rate and discount