Reliance AGM to be online for the first time, to participate in 1 lakh Share Holders meeting 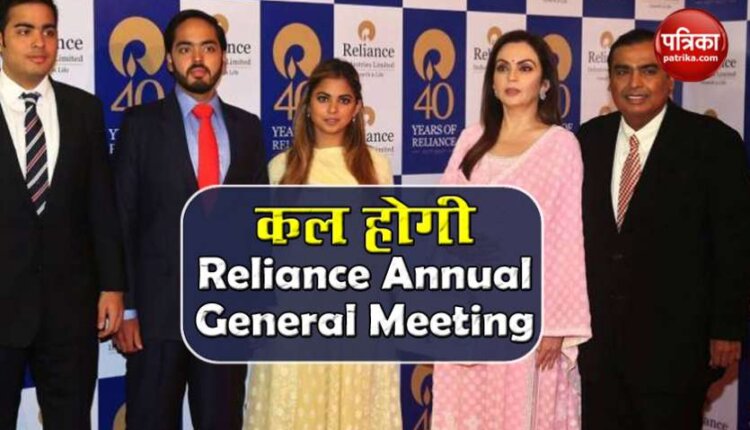 new Delhi: Reliance Industries Limited (RIL) is holding its 43rd Annual General Meeting on 15 July i.e. tomorrow. Due to the Corona Pandemic, the company will do it on the AGM online platform for the first time. The company’s 1 lakh shareholders are expected to participate in tomorrow’s meeting.

Reliance has also released a special WhatsApp chatbot for this meeting that starts at 2 pm. For this, you just have to save +91 79771 11111 to your phone and send it by typing ‘Hi’.

There is a hefty income in sandalwood farming, you can earn 60 lakhs by spending 1 lakh

This meeting is also special because it is the first AGM after the launch of Jio’s IPO. It is also important to note here that on Monday only Mukesh Ambani (Mukesh Ambani) the title of being the 6th richest man in the world Has done its name.

Great year- Since the last AGM held on August 12, 2019, Reliance Share has given 63% returns. The company’s stock has given 24 per cent returns this year till date. At the same time, 47 percent has been given on yearly basis, 20 percent on monthly basis and 5 percent on weekly basis.

The company’s market cap (Market Capital) at the time of the last AGM was Rs 7.29 lakh crore, which has crossed Rs 12 lakh crore today.

You may know that due to Coronavirus Pandemic, the company was initially hit hard, but due to Jio Deals, the company not only returned to business but also succeeded in getting the company debt-free. is.

There is a hefty income in sandalwood farming, you can earn 60 lakhs by spending 1 lakh

Record investment of foreign investors in the stock market, figures came as a…

Comedian Kapil Sharma, who came in support of farmers, said – We are with…

Manasi Singh Nov 30, 2020
Comedian Kapil Sharma has stood with the farmers supporting them. Kapil has tweeted and put his side. It is said…

Himanshi Khurana spoke on Kangana Ranaut’s tweet on the…