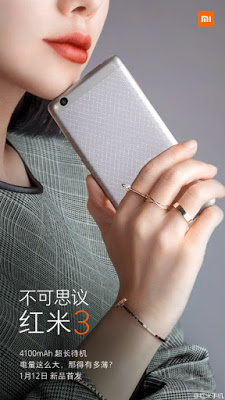 Xiaomi on Tuesday, before the launching Redmi 3 said “Redmi 3 to have a battery of 4,100 mAh. Also, an analyst from China informed that Xiaomi Redmi 3 would have Snapdragon 616 processor. Redmi is a china-based company which unveiled the battery capacity of Redmi 3 on social media site called Weibo.

When compared Xiaomi Redmi 2 has only 2200 mAh battery. During the first teaser image released Xiaomi confirmed that the handset has a 5-inch display and it comes with metal unibody chassis.

The Chinese analyst has not revealed full details of the price. But given that the Xiaomi Redmi is a budget segment phone, Unlikely it appears to be worth much more. Xiaomi Redmi 2 was launched in January last year. At that time, the price of this handset in China was 699 Chinese yuan (about Rs 7,100).