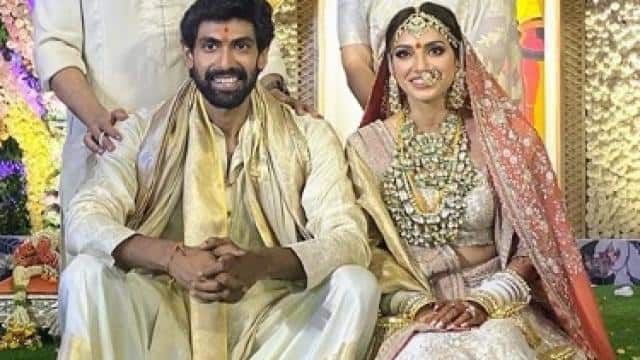 Bollywood actors Rana Daggubati and Mihika Bajaj got married on Saturday at Ramnayudu Studios in Hyderabad. Only 30 people attended this wedding ceremony. After the wedding, the first photo of the couple has been revealed, which actor Ramcharan Teja shared on his Instagram account. This picture of Rana and Mihika is getting viral on social media.

Ramcharan Teja and his wife Upasana are also seen in the photo with Rana and Mihika. Sharing the photo, Ramcharan wrote in the caption, “Finally my Hulk got married. Best wishes to Rana Daggubati and Mihika Bajaj. ”Rana Daggubati’s wedding was attended by stars like Venkatesh, Samantha Annikeni, Allu Arjun, Naga Chaitanya besides Ramcharan Teja.

Pankaj Tripathi said- people should be worried about their state’s education budget, not the box office collection

Let us tell you that Rana’s father Suresh had told in a conversation with the Times of India that only family members have been invited to the wedding. The film industry and outside have not invited their close friends. The truth is that the cases of Kovid-19 are increasing continuously and we do not want to endanger anyone’s life because of our celebration.

He further said that Kovid-19 will be tested for whoever comes to the wedding. Sanitizers will be placed everywhere at the wedding venue and social distancing will be followed. This is a happy occasion and we also want to make it safe.