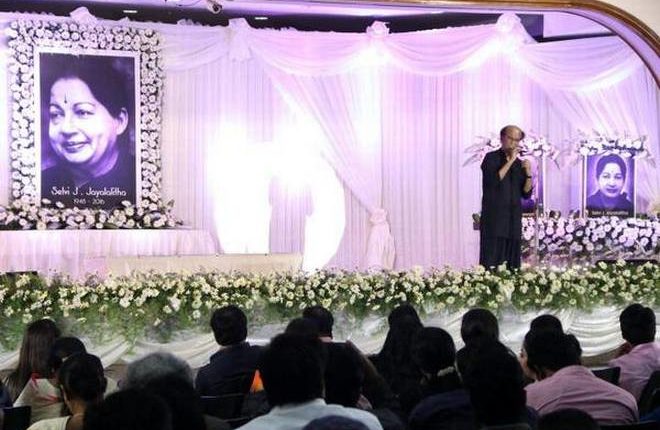 South Indian Superstar Rajinikanth on Sunday unveiled a major story. He said the late Chief Minister Jayalalithaa, was defeated in 1996 Tamil Nadu assembly elections because of him. He said that during the election campaign, he condemned Jayalalithaa and that’s why she was tense.

The veteran actor, speaking at the condolence meeting of Jayalalithaa said AIADMK in 1996 assembly elections of Tamil Nadu during the election campaign she was infuriated by his words. He was one of the causes for the defeat of her in the election in 1996 said, Rajinikanth. At that time the superstar stated that “if she is voted to power again, even God cannot save Tamil Nadu.”

Rajinikanth said he was surprised, despite all the protests, she attended his daughter’s wedding. Rajinikanth said “I mustered enough courage, to invite her to the marriage of my daughter. I thought she would not attend, but that did not happen.”

Rajini said, “Jayalalithaa stated that she need to participate in another wedding as well as she endorsed that she will attend his daughter’s wedding.  The absence of a Golden Heart Lady is regrettable indeed. She was one of those politicians who only own and manage their efforts into winning. ”

Mobile Wallets & Apps are not secure in India Says Qualcomm